Which God Lloyd is talking about is up for debate, but what's not up for debate is the amount of cons, frauds and general screwing of the public out of money, which most likely winds up in some offshore account and Israel, so Lloyd and his fellow (((thieves))) can live like royalty.

Here's just a small portion of BLANKFEIN's personal piggy bank, Goldman Sachs, has been doing to us GOYIM. 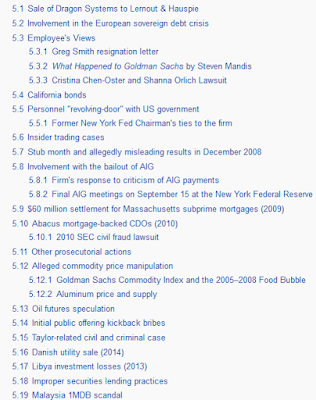 Here's another peek into G-d's right-hand man doing his thing. Must be nice to be able to flaunt the law, rake in the Big Bucks and not worry about prosecution.

But Goldman Sachs isn't the only one. Across town at Citibank, Jamie Dimon is setting records for the amount of felonies he racks up! (Dimon supposedly isn't a (((Tribe))) member, but he's married to a Jewess and loves to donate to Jew charities, so we'll give him an honorary kippah!)


Database Reveals U.S. as Financial House of Horrors Since Repeal of Glass-Steagall Act

The Consumer Financial Protection Bureau (CFPB) has set up an online database of financial horror stories that shows what happens when an average American interacts with one of the financial supermarkets (a/k/a universal banks) that grew out of the repeal of the investor protection legislation known as the Glass-Steagall Act. The complaints are concentrated against the biggest Wall Street banks.

Here's a very small listing of the crimes Citi has been engaging in, but why not, who's going to prosecute? 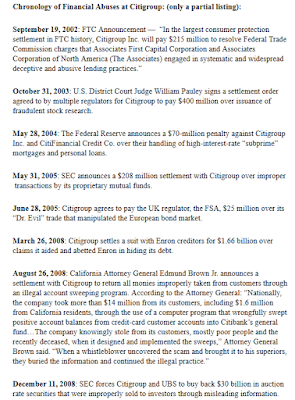 
Bernie Madoff committed the biggest financial crime in history. He stole $64.8 billion from tens of thousands of innocent people from countries all over the world. But he did not do this alone. In fact, he could not have done this alone. He needed the assistance of a major financial institution and he needed a bank that would conceal his criminal activities.

Test your financial crimes ability on this toughie!

If you are the CEO of JP Morgan Chase and have to accept a deferred prosecution agreement on a two-count felony Information filed by the US Department of Justice because, on your watch, JP Morgan Chase let the world’s biggest fraudster steal billions of dollars from its customers, you:

Time's up, the correct answer is Get a 74% raise! If fraud was an Olympic event, JP MorganChase would win the Gold medal with 37,000 complaints of fraud!!!

Yes, life is good if you're a Wall Street con artist.

Hmm, wonder (((whom)) Bernie used as his accomplices?

Former Treasury Secretary Tim GEITHNER was one, guess you had to be (((chosen))) to get into the inner sanctum! Like former Treasury Secretary Robert RUBIN, who helped set up this whorehouse casino by pushing Congress to get rid of the Depression-era Glass-Steagall Act, that kept deposit and investment banks separate. But hey, what's an economic depression between (((friends)))?

All of this fraud is nothing new, check out this article from 2002 that goes into the games of 'Three-Card Monte' then available for the gullible GOYIM.

Now if I was a conspiracy theorist, I'd think that the those (((Too Big to Fail Wall Street banks))) are hiding all these frauds and thefts behind the nonstop Muslim fear propaganda generated by the Jew MSM and that they've been doing that since the Israeli masterminded 9/11 False Flag.

A conspiracy theorist might also think that those same (((banks))) are getting ready to blow up again, worse than the 2008 looting, so they'll need and even bigger False Flag to hide this next looting behind, because people that are too scared to think are ripe for looting. The more ignorant they are, the easier they are to manage.

But I'd only think that if I was a conspiracy theorist.