Here's who they've been helping in Syria 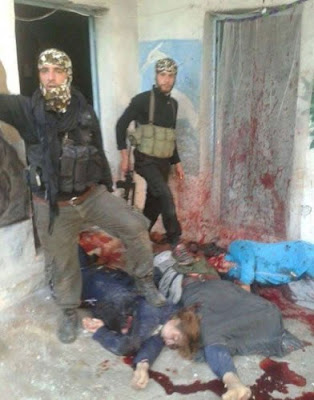 They're calling themselves part of a NATO team, but last time I checked, Saudi Arabia, Qatar and Morocco were NOT part of NATO. Israel has some kind of 'observer' status, to make sure the NATO thugs do the Zionist entity's bidding.

No, they're special forces from several nations, forming a coven of death with the moderate head-choppers to destroy Syria and kill as many Muslims as possible, to make their Yid Overlords happy.

No wonder Samantha Powers has been going ballistic at the UN, they were worried that what happened might happen, that the USA/Israel/SA would be exposed as sadistic, mass-murdering SOB's who kill for fun.

"Liver for supper anyone?"

DAMASCUS – According to two reports coming out of Aleppo today, at least 14 US Coalition military officers were captured this morning in an East Aleppo bunker by Syrian Special Forces.

This story was quietly leaked by Voltaire.net, who announced, “The Security Council is sitting in private on Friday, December 16, 2016, at 17:00 GMT, while NATO officers were arrested this morning by the Syrian Special Forces in a bunker in East Aleppo.”

Fares Shehabi MP, a prominent Syrian Parliamentarian and head of Aleppo’s Chamber of Commerce published the names of the Coalition officers on his Facebook page on the 15th December (emphasis added):

In addition to Voltaire.net, the other original report was provided by Damascus-based Syrian journalist Said Hilal Alcharifi. According to Alcharifi, captured “NATO” officers were from a number of member states including the US, France, Germany and Turkey, as well as Israel. Here is his statement (translated from French):

“Thanks to information received, Syrian authorities discovered the headquarters of high ranking western/NATO officers in the basement of an area in East Aleppo and have captured them alive. Some names have already been given to Syrian journalists, myself included. The nationalities are US, French, British, German, Israeli, Turkish, Saudi, Moroccan, Qatari etc. In light of their nationalities and their rank, I assure you that the Syrian government have a very important catch, which should enable them to direct negotiations with the countries that have tried to destroy them.”

Tried to find something about the American listed, David Scott Winer, but that's either a made-up name or he's a ghost online.