Harvest of Despair: What The New York Times LIED About Mass Deaths in the Ukraine

“Any report of a famine in Russia is today an exaggeration or malignant propaganda. There is no actual starvation or deaths from starvation but there is widespread mortality from diseases due to malnutrition.” (as reported by the New York Times correspondent and Pulitzer-prize winner Walter Duranty)

Bet you never heard of this DC Memorial, since the only one allowed to blare constantly is the Holocaust™ noise. Is that because Soviet Jews were behind the Holodomor massacre? The descendants of those twisted Soviet Jews now control Israel, and have put Gazans on a diet, as they call it, but it's actually a form of starvation. 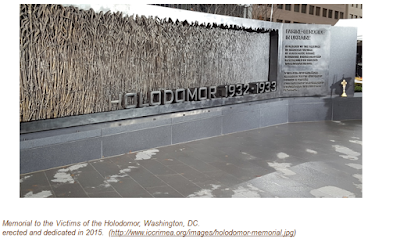 The term Holodomor refers specifically to the brutal artificial famine imposed by Stalin's regime on Soviet Ukraine and primarily ethnically Ukrainian areas in the Northern Caucasus in 1932-33.

In its broadest sense, it is also used to describe the Ukrainian genocide that began in 1929 with the massive waves of deadly deportations of Ukraine's most successful farmers (kurkuls, or kulaks, in Russian) as well as the deportations and executions of Ukraine's religious, intellectual and cultural leaders, culminating in the devastating forced famine that killed millions more innocent individuals. The genocide in fact continued for several more years with the further destruction of Ukraine's political leadership, the resettlement of Ukraine's depopulated areas with other ethnic groups, the prosecution of those who dared to speak of the famine publicly, and the consistent blatant denial of famine by the Soviet regime.

1932-1933
The Soviet government sharply increases Ukraine's production quotas, ensuring that they could not be met. Starvation becomes widespread. In the summer of 1932, a decree is implemented that calls for the arrest or execution of any person – even a child -- found taking as little as a few stalks of wheat or any possible food item from the fields where he worked. By decree, discriminatory voucher systems are implemented, and military blockades are erected around many Ukrainian villages preventing the transport of food into the villages and the hungry from leaving in search of food. Brigades of young activists from other Soviet regions are brought in to sweep through the villages and confiscate hidden grain, and eventually any and all food from the farmers' homes. Stalin states of Ukraine that "the national question is in essence a rural question" and he and his commanders determine to "teach a lesson through famine" and ultimately, to deal a "crushing blow" to the backbone of Ukraine, its rural population. [Executing people for trying to feed the starving? What Israel does when intercepting aid convoys in international waters, and beating, torturing and killing some of the peaceful aid workers trying to feed starving Gazans.]

1933
By June, at the height of the famine, people in Ukraine are dying at the rate of 30,000 a day, nearly a third of them are children under 10. Between 1932-34, approximately 4 million deaths are attributed to starvation within the borders of Soviet Ukraine. This does not include deportations, executions, or deaths from ordinary causes. Stalin denies to the world that there is any famine in Ukraine, and continues to export millions of tons of grain, more than enough to have saved every starving man, woman and child.

USSR Bolshevik Jews were behind this savagery,trying to birth into existence their 'New World Order,' which is about letting Israel be the world's ruler, regardless of the misery that would cause. The end game has always been to ‘Shock and Awe’ Iran into a busted up state of anarchy, which is what Israel wants, and what Israel wants, our corrupt government gladly provides it, regardless of the amount of blood or treasure it costs Americans.

"Please return the grain that you have confiscated from me. If you don’t return it I’ll die. I’m 78 years old and I’m incapable of searching for food by myself."

(From a petition to the authorities by I.A. Rylov)

"I saw the ravages of the famine of 1932-1933 in the Ukraine: hordes of families in rags begging at the railway stations, the women lifting up to the compartment window their starving brats, which, with drumstick limbs, big cadaverous heads and puffed bellies, looked like embryos out of alcohol bottles ..."

(as remembered by Arthur Kaestler, a famous British novelist, journalist, and critic. Koestler spent about three months in the Ukrainian city of Kharkiv during the Famine. He wrote about his experiences in "The God That Failed", a 1949 book which collects together six essays with the testimonies of a number of famous ex-Communists, who were writers and journalists.)

"What I saw that morning ... was inexpressibly horrible. On a battlefield men die quickly, they fight back ... Here I saw people dying in solitude by slow degrees, dying hideously, without the excuse of sacrifice for a cause. They had been trapped and left to starve, each in his own home, by a political decision made in a far-off capital around conference and banquet tables. There was not even the consolation of inevitability to relieve the horror."

(as remembered by Victor Kravchenko, a Soviet defector who wrote up his experiences of life in the Soviet Union and as a Soviet official, especially in his 1946 book "I Chose Freedom". "I Chose Freedom" containing extensive revelations on collectivization, Soviet prison camps and the use of slave labor came at a time of growing tension between the Warsaw Pact nations and the West. His death from bullet wounds in his apartment remains unclarified, though it was officially ruled a suicide. His son Andrew continues to believe he was the victim of a KGB execution.)

"From 1931 to 1934 we had great harvests. The weather conditions were great. However, all the grain was taken from us. People searched the fields for mice burrows hoping to find measly amounts of grain stored by mice..."

(as remembered by Mykola Karlosh)

"I still get nauseous when I remember the burial hole that all the dead livestock was thrown into. I still remember people screaming by that hole. Driven to madness by hunger people were ripping the meat of the dead animals. The stronger ones were getting bigger pieces. People ate dogs, cats, just about anything to survive."

(as remembered by Vasil Boroznyak)

"People were dying all over our village. The dogs ate the ones that were not buried. If people could catch the dogs they were eaten. In the neighboring village people ate bodies that they dug up."