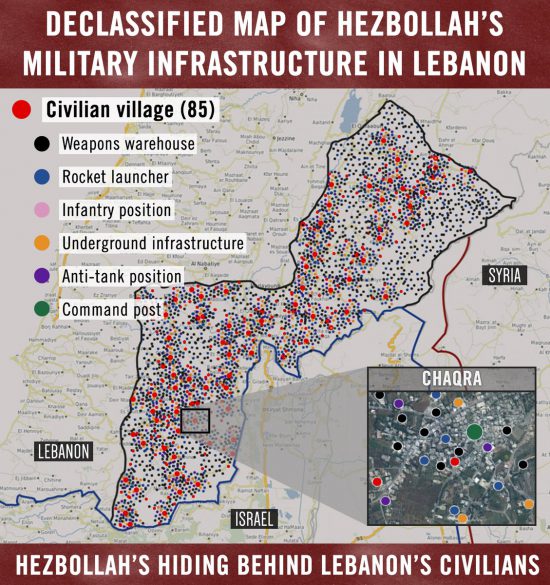 A “declassified” map of an alleged Hezbollah military buildup in southern Lebanon shared by the Israel Defense Forces (IDF) has been exposed by Twitter users as a fake, forcing the IDF to admit the picture was just a “visual illustration” of the militant group’s “war crimes.”

The map titled “Declassified map of Hezbollah’s military infrastructure in Lebanon” was posted on the official IDF Twitter account on Tuesday, highlighting 85 towns and villages in the southern part of the country.

Spots, showing civilian settlements were surrounded by numerous multicolored dots, labeled with names such as “weapon warehouse” or “rocket launcher” and other military facilities.

The tagline of the image said “Hezbollah’s hiding behind Lebanon’s civilians,” while the tweet’s caption was the simple and rather dramatic statement, “this is a war crime.”

Such a level of detail and awareness of alleged Hezbollah activities would be truly impressive, if the map had not turned out to be a fake. Some Twitter users pointed out that it was unlikely the image was a “declassified map,” since its history showed that it had been created using Google Maps via an IDF spokesperson account. The dots, marking the alleged “military buildup,” even featured a repetitive pattern.

IDF later said the map had been an “illustration,” and users simply misinterpreted it as a piece of declassified intelligence. The map’s title, tagline and caption were presumably “illustrative” too.

The racist, back-stabbing, thieving, lying, murderous, unhinged, blood-sucking Israeli psychos are needing another fix of Muslim blood to satiate their blood-libel thirst, so now they'll re-invade Lebanon again, to make up for all the Syrians they weren't able to get their Zionist lackey's to slaughter in Syria. When the Zionist jets start bombing Lebanese civilians, the BSm and DC will start squawking, "Israel has the right to defend itself" repeatedly, as if saying it enough will make a wish come true.

Remember this phony map the lying Jew MSM distributed to get our blood boiling and demanding revenge on someone, anyone, as long as they were Muslim?

Tora Bora was variously described by the western media to be an "impregnable cave fortress" housing 2,000 men complete with a hospital, a hydroelectric power plant, offices, a hotel, arms and ammunition stores, roads large enough to drive a tank into, and sophisticated tunnel, and ventilation systems.

Both the British and American press published detailed plans of the base. When shown a plan during an NBC interview, Donald Rumsfeld of the United States Secretary of Defense said "This is serious business, there's not one of those, there are many of those".

An elaborate military operation was planned which included deployment of the CIA-US Special Operations Forces team with laser markers to guide non-stop heavy air strikes during 72 hours. When Tora Bora was eventually captured by the U.S. and Afghan troops, no traces of the supposed "fortress" were found despite painstaking searches in the surrounding areas. Tora Bora turned out to be a system of small natural caves housing at most, 200 fighters. While arms and ammunition stores were found, there were no traces of the advanced facilities claimed to exist.

15 years later, the Pentagon still has troops in Afghanistan, to protect those 'Too Big to Fail' Wall Street casinos drug-laundering heroin profits and to protect that 'SLC,' Israel.


The real reason why the U.S. continues its presence in Afghanistan is Iran the country which is an annoyance for Israel, said Karen Kwiatkowski, a writer and former U.S. Air Force officer.

NO MORE BLOOD OR WEALTH SPENT ON ISRAEL!!