They get bent out of shape, becoming PO and indignant that someone would actually ask them to stop their lying, thieving, treacherous, homicidal ways. The UN asks Israel to stop stealing Palestinian land and obey international law and some treaties, and Israel and its loyal GOY lapdogs start screeching like a banshee. "How dare those GOYIM ask us to obey some stupid law about land and borders, we are G-d's chosen and do as we please, laws mean nothing to us, unless they benefit our parasitic state of hate."

Us GOY should be always singing the praises of Israel, sure there are some and always worshiping at the Holocaust™ altar, even though that is the BIGGEST con of the 20th Century.

Israel's shock troops swung into action, to let the world know how they feel about uppity GOYIM daring to question Israel's land thefts and the murder of the native Palestinians, some drew cartoons, using NAZI imagery: 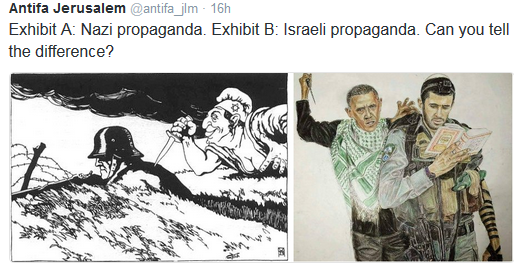 Others accused Obama of bestiality and his wife to apes:

Carl Paladino, a western New York builder, one-time Republican candidate for governor of New York and political ally of President-elect Donald J. Trump, came under fire on Friday for racially offensive comments about President Obama and the first lady, who Mr. Paladino said should be “let loose in the outback of Zimbabwe.”

Mr. Paladino’s comments were published in Artvoice, a weekly Buffalo newspaper. They came in response to an open-ended feature in which local figures were asked about their hopes for 2017. “Obama catches mad cow disease after being caught having relations with a Herford,” said Mr. Paladino, who ran unsuccessfully for governor in 2010, making an apparent reference to the Hereford cattle breed. He said he hoped the disease killed the president.

Asked what he most wanted to see “go away” in the new year, Mr. Paladino — who has a reputation in New York political and business circles for speaking in an unfiltered manner reminiscent of Mr. Trump’s — answered, “Michelle Obama.”

“I’d like her to return to being a male and let loose in the outback of Zimbabwe where she lives comfortably in a cave with Maxie, the gorilla,” he said.

Just for asking Israel to stop stealing Palestinian land? The ones who will pay the most will be the Palestinians, who will be subject to increased attacks from mad-dog settlers, what they call a 'price-tag' attacks. Maybe Malaysia will lose some more jetliners?

Israel is making numerous threats against those nations that finally did the right thing and asked Israel to stop stealing, and Israeli CRIME MINISTER Nuttyahoo has vowed retribution. Like another Israeli masterminded 9/11 False Flag?

If you raise a spoiled child, always giving into it's temper tantrums, and feeding it ice cream and cookies all day long, and looking the other way when it tears up the house, don't be surprised when it commits further mayhem.
Posted by Greg Bacon at 11:27 AM