From the Bolshevik Jew Soviet terrors to the Israel masterminded 9/11 False Flag and beyond, Jew Inc has plenty to answer for. 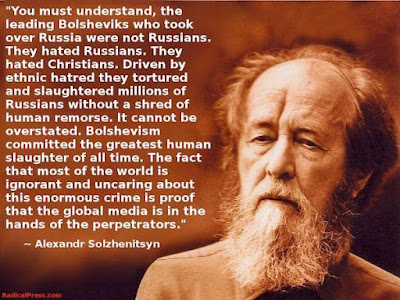 "200 Years Together, a History of Russians and the Jews" by Alexander Solzhenitsyn, Chapter XXV: Accusing Russia.

(Yet who before the Bolshevik revolution had ever waited for a knock on the door in the middle of the night?)

"We must see ourselves objectively, see our fatal shortcomings. Suddenly, I grasped the Jewish point of view; I looked around and I was horrified as well: Dear God, where we, the Jews? Cards, dominoes, gaping at TV? What cattle, what animals surround us! They have neither God nor spiritual interests. And so much feeling of hurt from past oppression rises in your soul. Only it is forgotten that the real Russians were killed, slaughtered and suppressed, and the rest were stupefied, embittered, and driven to the extremes by Bolshevik thugs, and not without the zealous participation of the fathers of today’s young Jewish intellectuals....

There are so many, such confident voices ready to judge Russia’s many crimes and failings, her inexhaustible guilt towards the Jews – and they so sincerely believe this guilt to be inexhaustible almost all of them believe it! Meanwhile, their own people are coyly cleared of any responsibility for their participation in Cheka shootings, for sinking the barges and their doomed human cargo in the White and Caspian seas, for their role in collectivization, the Ukrainian famine and in all the abominations of the Soviet administration, for their talented zeal in brainwashing the “natives.” This is not contrition.

We, brothers or strangers, need to share that responsibility. It would have been cleanest and healthiest to exchange contrition for everything committed. I will not stop calling on the Russians to do that. And I am inviting the Jews to do the same. To repent not for Trotsky, Kamenev and Zinoviev; they are known and anyway can be brushed aside, with “they were not real Jews!” Instead, I invite Jews to look honestly into the oppressive depths of the early Soviet system, at all those “invisible” characters such as Isai Davidovich Berg, who created the infamous gas wagon which later brought so much affliction on the Jews themselves, and I call on them to look honestly on those many much more obscure bureaucrats who had pushed papers in the Soviet apparatus, and who had never appeared in light.

Gas wagon? How much of the phony Holocau$t™ are actually real incidents that Das Juden committed against Russia, which they then transferred into the Holocau$t™ religion? When I searched for "pics of Bolshevik Jew death squads," most of what came up were Holy Holocaust incidents, meaning the links were worthless.
How would you like to get a visit from one of these homicidal maniacs at 3 am? 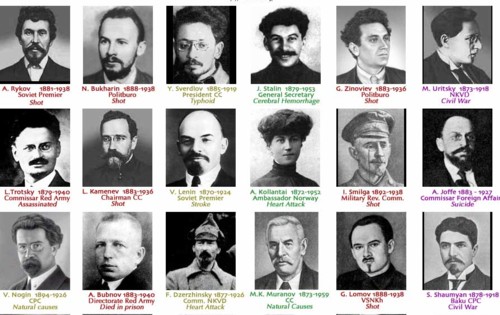 “The unprecedented catastrophe of the Russian revolution required an explanation… For very many this lay in the coming to power of the Jews, and their hatred for the Russian people. For after the revolution of February, 1917, the Jews acquired full rights with the rest of the population, and the barriers set up by the Pale of Settlement were destroyed. Jews poured from the western regions into the major cities of European Russia and soon acquired prominent executive positions in all major sectors of government and the economy…. The mainly Jewish nature of the Bolshevik leadership—and of the world revolution in general—cannot be doubted….

“The Jews were especially dominant in the most feared and bloodthirsty part of the Bolshevik State apparatus, the Cheka, which, writes Brendon, “consisted of 250,000 officers (including 100,000 border guards). In the first 6 years of Bolshevik rule it had executed at least 200,000. Moreover, the Cheka was empowered to act as ‘policeman, gaoler, investigator, prosecutor, judge and executioner’. It also employed barbaric forms of torture….

“So complete was the Jewish domination of Russia as a result of the revolution that it is a misnomer to speak about the ‘Russian revolution’; it should more accurately be called the ‘Russian-Jewish revolution’.”

Ask people who was the greatest mass murderer of the 20th Century and they will automatically respond, "Hitler." But that is a LIE, the biggest mass murderer was the Jew Genrikh Yagoda, who was responsible for the murder of at least 10 + million Russians and Ukrainians, but that goes against the Holy Holocau$t™ orthodoxy, so I shall get myself to an ADL sanctioned Thought Reform Center and admit my guilt of using my brain to think. 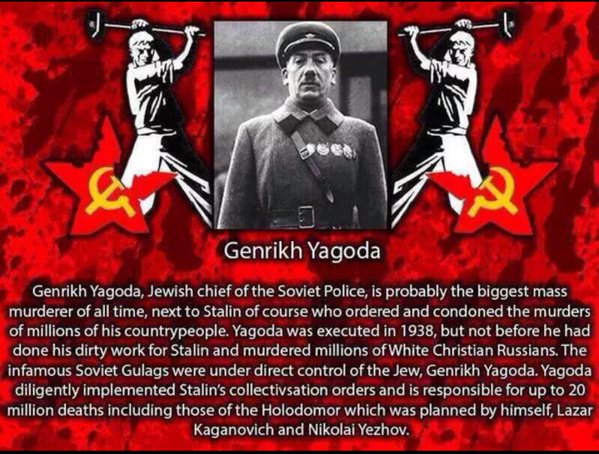