US Treasury: One Jew Leaves, Another Jew Takes the Position 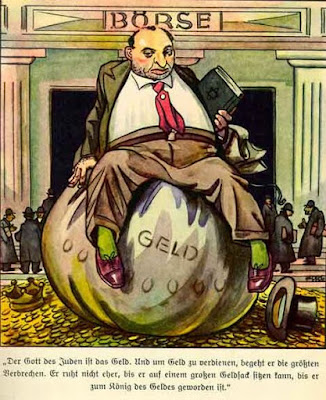 NO GOYIM ALLOWED!
The Under Secretary for Terrorism and Financial Intelligence is a position within the United States Department of the Treasury responsible for directing the Treasury's efforts to cut the lines of financial support for terrorists, fight financial crime, enforce economic sanctions against rogue nations, and combat the financial support of the proliferation of weapons of mass destruction. The Under Secretary is appointed by the President and confirmed by the Senate.

Is it impossible to find an AMERICAN, that is not a Jew, to fill this crucial US Treasury spot? Not only is the new "Undersecretary of the Treasury for Terrorism and Financial Intelligence" a Jew, she is an Israeli.

(Note: Good luck finding these names on the actual US Treasury site, guess someone is paranoid that us GOY might start putting 2 and 2 together..)


"The White House on Tuesday named Sigal Mandelker, a former Israeli, as Undersecretary of the Treasury for Terrorism and Financial Intelligence. The position places her in charge of US sanctions against countries and terrorist organizations. Mandelker, a lawyer by training, previously held a number of posts in the Justice Department and the Homeland Security Department in which she handled cyber security, terrorism and national security matters, among others."

Before the Israeli Jew Mandelker was appointed, it was held by Adam Szubin... Before Szubin, it was David Cohen.....Cohen left the Treasury to become the Deputy Director of the CIA, which probably stands for 'Covering Israelis Ass.'

There is one mob that the Undersecretary of the Treasury for Terrorism and Financial Intelligence can NOT investigate, that is the Jew-run and controlled Federal Reserve. Hmmm. Bet they never investigate the world's #1 terrorist state, Apartheid Israel, since they're too busy sanctioning the nations Israel wants destroyed, like Iran and Syria.

Other notable Treasury heads have been Robert Rubin, who helped set up the 2008 stock market crash and economic depression by pushing thru the gutting of the 'Great Depression' Glass-Steagall law, which forbid deposit banks from gambling with YOUR money. Rubin also helped push thru major changes to the commodity and financial markets, which led to the MBS fiasco.

Another Treasury clown was the Shabbos Goy Timmy Geithner, who helped con artist Bernie Madoff launder his stolen loot to Israel and stood by doing nothing while the MBS crisis was unfolding when Treasury Secretary. Guess he didn't want to impede his (((friends))) from looting American 401 K accounts and pension funds.

These dual citizens go to Jew Yeshiva schools like this one, which heavily promote Eretz Israel, an Israel stretching from the 'brook of Egypt to the Euphrates and from Turkey to Arabia.' No wonder we're bogged down in ME wars, they're wars fought for Eretz Israel in which Americans supply the money, weapons and cannon fodder and the Muslim nations supply the dead, while dual citizen Jews keep an eye on our money. Yeah, right.

Like former Pentagon Comptroller Dov Zakheim, who had several trillion dollars mysteriously 'disappear' while he was keeping a close eye on the books!

Time to turn out the lights America. When you let a group of financial sharpies, many with dual citizenship control your finances and economy, that is slavery, not freedom. You won't see troops marching down the streets, this takeover of our government is much more subtle, to keep you GOYIM from seeing with your own eyes what is happening to your freedom.
Posted by Greg Bacon at 9:05 AM