The tagline on a brochure for the event: "Invest $500,000 and immigrate to the United States."

Even though it's his sister making the pitch, the Chinese know what's implied. Kushner has access and most importantly, juice.

Maybe they'll invest in that wall between Mexico and the USA Herr Trump vowed to build?

For a mere 500K, rich Chinese can move to the USA, as long as they do 'business' with the Kushner mob. Besides, if they hesitate, Daddy can send the US Navy near China to help convince them to invest in their Kushner's future.


Next port of Call, China? 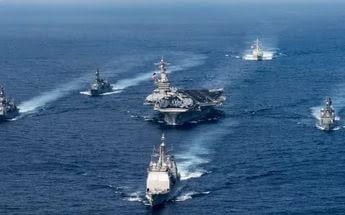 BEIJING - The Kushner family came to the United States as refugees, worked hard and made it big - and if you invest in Kushner properties, so can you.

Over several hours of slide shows and presentations, representatives from the Kushner family business urged Chinese citizens gathered at the Ritz-Carlton hotel to consider investing hundreds of thousands of dollars in a New Jersey real estate project to secure what's known as an investor visa.

The EB-5 immigrant investor visa program, which allows foreign investors to invest in US projects that create jobs and then apply to immigrate, has been used by both the Trump and Kushner family businesses.

In the ballroom of the Ritz-Carlton on Saturday, Chinese investors were advised to invest sooner rather than later in case the rules change. "Invest early and you will invest under the old rules," one speaker said.

Journalists were initially seated at the back of the ballroom, but as the presentations got underway, a public relations representative asked The Post to leave, saying the presence of foreign reporters threatened the "stability" of the event.

At one point, organisers grabbed a reporter's phone and backpack to try to force that person to leave. Later, as investors started leaving the ballroom, organisers physically surrounded attendees to stop them from giving interviews.

Asked why reporters were asked to leave, a public relations representative, who declined to identify herself, said simply, "This is not the story we want." 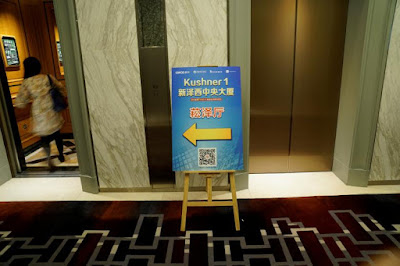 The developers are seeking to raise $150 million, or 15.4 percent of funding for the project, from investors through the EB-5 visa program, according to marketing materials posted by the event's organizer, immigration agency Qiaowai.

The controversial EB-5 program allows wealthy foreigners to, in effect, buy U.S. immigration visas for themselves and families by investing at least $500,000 in certain development projects.

One potential investor, Sophie Xing, said a "very important" factor in her decision to attend Sunday's event was the fact the project was a Kushner Companies investment and that Trump's son-in-law's sister would be in Shanghai.

"Actually I really don't know how close they are but I felt that this was a pretty good project," she said.