You'll Have So Much FUN in Saudi Arabia, You Might Lose Your Head!

Welcome to Saudi Arabia, the world's most repressive regime that rich fucks--like Trump--just love to suck up to.

Saudi Arabia Fun Fact! Did you know that Saudi Arabia leads the world in beheadings, much more than the terrorists they fund, like ISIS/DAESH or al Sham!

Friendly religious police from the Ministry of Promotion of Virtue and Prevention of Vice will be glad to assist you in meeting Allah personally, should you violate any of Shari'a law's reasonable proscriptions. If they don't shoot you there and then, they will be happy to take you to a Shari'a court, where you will get a fair trial and be found guilty. One of the following things will happen to you:

You could be shot privately; You could be beheaded publicly in a place called "chop-chop square" with thousands of people watching for the lulz, since it's the only fun you can get in Saudi Arabia; You could be tied to a pole and have a stripper fall on your face. The stripper is Rosie O'Donnell, or at least smells like her; Your hands or feet or both might be chopped off and confiscated. But glued back on, once you say "I'm sorry"; If you are lucky, you'll just get whipped until you are unable to sit down and not an inch of skin is left on your back; If your are very lucky, you will get to listen to Sarah Palin or some crazy old man in a bedsheet talk about freedom and war on terror until you beg for mercy or your ears bleed

Saudis put their women on a pedestal, then stone her to death! 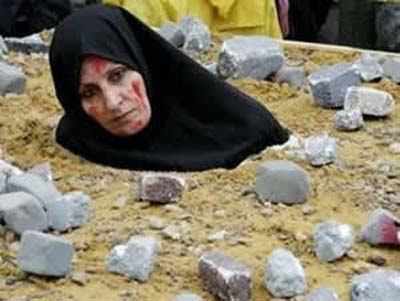 Be sure to include Saudi Arabia in your vacation plans, for the trip of a lifetime, or life, if you violate one of their millions of stupid-ass rules, it will be "Off with Your Head, Infidel!"
Posted by Greg Bacon at 3:21 PM