Another REAL Holocaust You Never Heard of GOY! 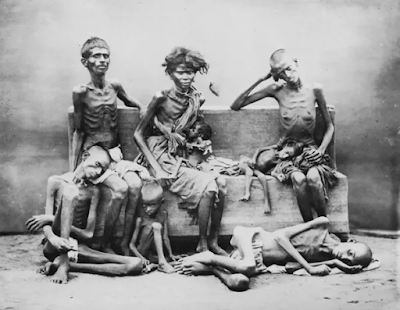 “I hate Indians. They are a beastly people with a beastly religion. The famine was their own fault for breeding like rabbits,” said British prime minister Winston Churchill in 1943

In 1943 the British colonialist committed Bengali Holocaust through starvation which killed four million people – more than Nazis killed Jews in Europe during WWII.

What's that, you say you never heard of the Bengali Holocaust? Maybe it's because of those nearly 400 Hollywood Holocau$t™ movies and 'docs' that have poisoned many an American mind.

And with Steven Spielberg not only making Holo frauds, but also spending tens of millions in lawsuits chasing down and terrorizing those who dare ask historical questions about WW II, so that the Holocau$t™ will be like a rigged slot machine, paying off huge amounts of stolen money from Gentile nations.

Seventy years ago, at least 3 million people died from starvation and malnutrition during a famine in the Indian province of Bengal -- a partly man-made disaster that has been largely forgotten by the world beyond northeastern India.

Dr. Gideon Polya, an Australian biochemist, has called the Bengal famine a man-made “holocaust.” “The British brought an unsympathetic and ruthless economic agenda to India,” he wrote.

Many observers in both modern India and Great Britain blame Winston Churchill, Britain's inspiring wartime leader at the time, for the devastation wrought by the famine.

In 2010, Bengali author Madhusree Mukherjee wrote a book about the famine called “Churchill's Secret War,” in which she explicitly blamed Churchill for worsening the starvation in Bengal by ordering the diversion of food away from Indians and toward British troops around the world. Mukherjee’s book described how wheat from Australia (which could have been delivered to starving Indians) was instead transported to British troops in the Mediterranean and the Balkans. Even worse, British colonial authorities (again under Churchill’s leadership) actually turned down offers of food from Canada and the U.S.

“If it was someone else other than Churchill, I believe relief would have been sent, and, if it wasn’t for the war, the famine wouldn’t have occurred at all,” Mukherjee told Inter Press Service. Churchill’s hostility toward Indians has long been documented. Reportedly, when he first received a telegram from the British colonial authorities in New Delhi about the rising toll of famine deaths in Bengal, his reaction was simply that he regretted that nationalist leader Mahatma Gandhi was not one of the victims.