"Are You a Zionist Whore? Your Senate and House Members Are"

Poll: Most Americans Aren’t Zionists But Democratic and Republican Party Platforms Are

An unprecedented poll reveals the gaping void between American identification with Israel and the official positions taken by both major political parties.
A majority of American adults – 70.3 percent – do not consider themselves Zionists when defined as “A Zionist is a person who believes in the development and protection of a Jewish nation in what is now Israel.” Only 24.9 percent say, “I consider myself a Zionist” while 4.8% provided other responses.

The IRmep poll was fielded by Google Consumer Surveys June 15-18 to a representative sample of 1,030 American adult Internet users.
In contrast to their constituents, members of both major US political parties have long operated under overwhelmingly Zionist party platforms. The 2016 Democratic party platform references Israel 9 times. Republican party platform 19. They differ little on the key issues: 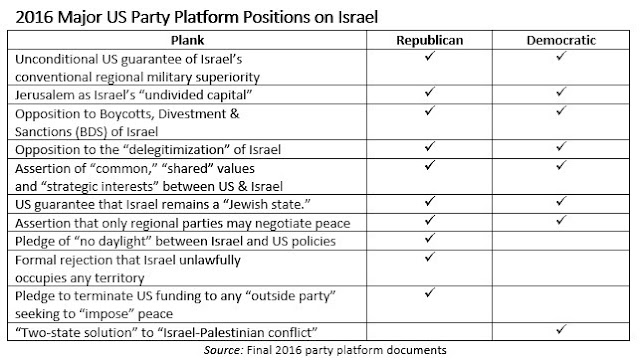 Other recent polling reveals the enormous divide between the views of Americans and the actions taken by their members of Congress. Americans are strongly opposed to massive, disproportionate, unconditional US foreign aid to Israel. They want Congress to consider Israel’s status as the region’s sole nuclear power. They would renegotiate or cancel the lopsided 1985 trade deal. They oppose relocation of the US embassy to Jerusalem, as well as the policy of “no-daylight” US coordination with Israel.
Yet most members of Congress strongly support these initiatives, including recent formal condemnations of the United Nations as inherently “anti-Israel” and ongoing attempts to outlaw grassroots boycotts of Israel over its endemic human rights abuses.

What maintains the immense void between the views of most Americans and their elected representatives? The Israel lobby.

"What maintains the immense void between the views of most Americans and their elected representatives? The Israel lobby." And lots and lots of money. It's a sweet deal for these parasitic racketeers, they get free money, OUR money, from Congress--plus lots of loot from their control of our financial system, thru the FED--then turn around and use some of that money to bribe Congress. Those that don't succumb, will be blackmailed with the threat of releasing some damning video of their perv lifestyle, so that in the end, damn near ALL of Congress bows before Apartheid Israel.

Some of have been sucking AIPAC for so long, their brain has become infected with some kind of parasitic organism and they actually think they are some kind of Israeli, bound by loyalty to defend 'Stolenland' at all costs.

Owning damn near all of the MSM also helps.

Who Occupies Whom in Israel-Palestine? Don’t Ask an American

A new poll published by the Institute for Research: Middle Eastern Policy, shows that a plurality of Americans misunderstand a fundamental fact about the Middle East. Specifically, a statistically representative sample of Americans and three other nationalities were asked a simple question about Israel and Palestine. The wording of the question and the results are shown below: