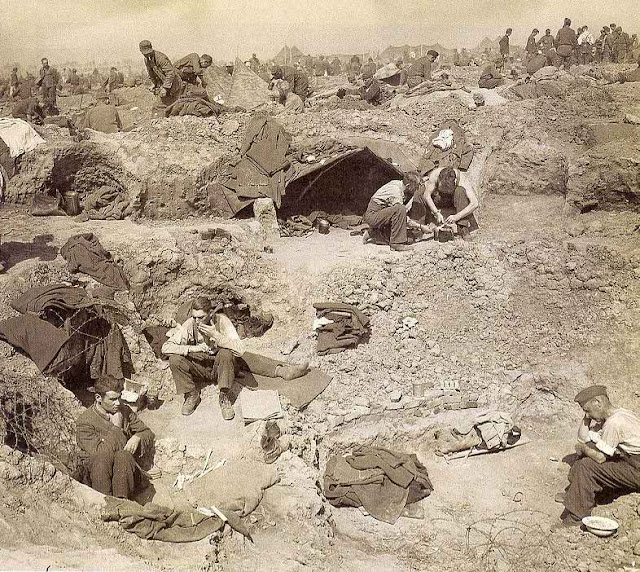 Among the early U.S captives was one Corporal Helmut Liebich, who had been working in an anti-aircraft experimental group at Peenemunde on the Baltic. Liebich was captured by the Americans on April 17, near Gotha in Central Germany. Forty-two years later, he recalled vividly that there were no tents in the Gotha camp, just barbed wire fences around a field soon churned to mud. The prisoners received a small ration of food on the first day but it was then cut in half. In order to get it, they were forced to run a gauntlet. Hunched ocer, they ran between lines of American guards who hit them with sticks as they scurried towards their food. On April 27, they were transferred to the U.S. camp at Heidesheim farther wet, where there was no food at all for days, then very little. Exposed, starved, and thirsty, the men started to die. Liebich saw between ten and thirty bodies a day being dragged out of his section, B, which at first held around 5,200 men.. He saw one prisoner beat another to death to get his piece of bread. One night when it rained, Liebich saw the sides of the holes in which they were sheltered, dug in soft sandy earth, collapse on men who were too weak to struggle out. They smothered before anyone could get to them. Liebich sat down and wept. “I could hardly believe men could be so cruel to each other.” 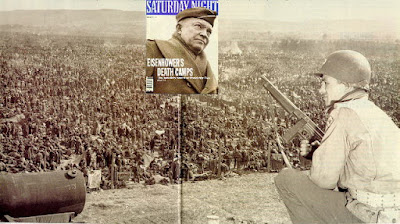 Rumours of conditions in the camps ran through the US Army. “Boy, those camps were bad news,” said Benedict K. Zobrist, a technical sergeant in the Medical Corps. “We were warned to stay as far away as we could.” In May and early June of 1945, a team of US Medical Corps doctors did survey some of the Rhineland camps, holding just over 80,000 German POWs. Its report is missing from the appropriate section of the National Archives in Washington, but two secondary sources reproduce some of the findings. The three main killers were diarrhoea and dysentery (treated as one category), cardiac disease, and pneumonia. But, straining medical terminology, the doctors also recorded deaths from “emaciation” and “exhaustion.” And their data revealed death rates eighty times as high as any peacetime norm.

While Germans were being tortured, starved and beat to death in these extermination camps, the Holocau$t™ LIES were being assembled, ready to infect the entire planet with Jew propaganda about an even that NEVER happened.