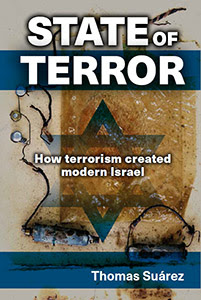 "A tour de force, based on diligent archival research that looks boldly at the impact of Zionism on Palestine and its people in the first part of the 20th century.

The book is the first comprehensive and structured analysis of the violence and terror employed by the Zionist movement and later the state of Israel against the people of Palestine.

Much of the suffering we witness today can be explained by, and connected to, this formative period covered thoroughly in this book."

Why has the Israel-Palestine ‘conflict’ endured for so long, with no resolution in sight? In this meticulously researched book, Thomas Suárez demonstrates that its cause is not the commonly depicted clash between two ethnic groups---Arabs and Jews---but the violent takeover of Palestine by Zionism, a European settler movement hailing from the era of ethnic nationalism.

Tapping a trove of declassified British documents, much of which has never before been published, the book details a shocking campaign of Zionist terrorism in 1940s and 1950s Palestine that targeted anyone who challenged its messianic settler goals, whether the British government, the indigenous Palestinians, or Jews.

Today's seemingly intractable quagmire is that terror campaign’s unfinished business, an Israeli state driven by unrequited territorial designs and the dream of ethnic ‘purity’. The role of Zionist terrorism in establishing the Israeli state and perpetuating today's conflict is laid bare in Suárez’s groundbreaking narrating of the unbroken historical record.

Naturally, when exposing the 'Talmud Terror Masters,' the interlopers that have and continue to invade Palestine, when exposing their genocide and ethnic cleansing these murderous frauds run for the shadows and the Jew Internet Defense Forces rally to protect their beloved state of Hate, as shown by comments left at the Amazon book selling site:

Brits, Americans and Spanish wars for independence were much worse. Worst anti Jew propaganda from an uber hypocrite. Avoid!

Why would anyone want to buy a trashy book of lies? Most people know that, the day Israel declared independence, it was invaded by 5 Arab armies, bent on genocide. However, most people don't know that, in 1947, the Arabs living within the British Mandate for Palestine (part of which was destined to become Israel) were waging a terror war against the Zionists. They conducted numerous massacres of Jews. This book won't tell you any of that. Furthermore, the so-called Deir Yassin Massacre has been widely debunked on numerous levels: [...]

Just hate and propaganda By Louis Allen on 7 November 2016

Disgusting trash By Cheryl on 7 November 2016

Yes, someone has a real aversion to the truth, they prefer the one taught to gullible Americans by the Zionist (((MSM))). The Deir Yassin Massacre has NOT been debunked, but those who want you to think so will repeat any lie to get the Israeli murderers off the hot seat.

Now let's see what the survivors of the Zionist Jew butchery had to say....

At 4:30 on Friday morning, 09.04.1948, and while the villagers slept, the Zionist terror gangs surrounded Deir Yasin. Palestinians woke up to the sound of loud speakers ordering them to leave the village, and the unsuspecting residents went out of their homes to investigate the situation, and it was then that the massacre began. The Irgun attacked the village from the south east, Stern attacked it from the east while the Haganah bombarded the village with mortars.

The Palestinian village guard tried to protect the residents and to stop the Zionist gangs, they fought heroically but with their meagre weaponry had little chance against three fully armed terror gangs. The Zionists opened fire at whoever tried escaping the village, and then moved into the village and started their “clean up”: they moved from one house to the other raping women, slaughtering children and killing whoever was inside with machine guns and knives. Whole families were lined up against the wall and executed. Pregnant women were bayoneted and the bodies of children were mutilated.

Safiyeh Attiyah (born 1907): describes how she was come upon by a man who suddenly opened up his trousers and pounced on her. “I began screaming and wailing. But the women around me were all meeting the same fate. After that they tore off our clothes so that they could fondle our breasts and our bodies with gestures too horrible to describe.” … “Some of the men were so anxious to get our earrings they ripped our ears to pull them off faster”

Muhammad Aref Sammour: testified before the British investigating officers that the Jewish gangs: “ripped open the bellies of all the women they found straight away with bayonets”. They also took jewelry from their victims and if those items did not come off easily: “they would cut off the arm to take the bracelet or cut the finger to get the ring.”

Zvi Ankori, who commanded the Haganah unit that occupied Deir Yasin after the massacre, gave this statement in 1982 about the massacre, published by Davar on April 9, 1982: “I went into 6 to 7 houses. I saw cut off genitalia and women’s crushed stomaches. According to the shooting signs on the bodies, it was direct murder.”