Where is the Poorest Village--Filled with Thieving Welfare Moochers--in the USA Located?

Before finding out, my guess would of been in some remote part of the Deep South or the Ozarks or some Appalachian village. But those guesses would be wrong.

That dubious prize goes to Kiryas Joel, New York, a heaven on Earth, if you're 'Chosen!'


Kiryas Joel often locally abbreviated as KJ is a village within the town of Monroe in Orange County, New York, United States. The majority of its residents are Yiddish-speaking Hasidic Jews who belong to the worldwide Satmar Hasidic sect.

According to 2008 census figures, the village has the highest poverty rate in the nation. More than two-thirds of residents live below the federal poverty line and 40% receive food stamps. It is also the place in the United States with the highest percentage of people who reported Hungarian extraction, as 18.9% of the population reported Hungarian descent in 2000.

Following the Satmar Hasidic Dynasty, this documentary explores the ultra-orthodox Jewish group's dealings and the corruption that surrounds them

When their not standing by their mail boxes, waiting for FREE gov't money, they like to mix things up, threatening murder on those who don't obey some rabid Rabbi explicitly or breaking windows of Tribe members who don't goose-step to the Rabbis dictates or even voter fraud:


On four occasions since 1990, the Middletown Times-Herald Record has run lengthy investigative articles on claims of electoral fraud in the village. A 1996 article found that Kiryas Joel residents who were students at yeshivas in Brooklyn had on many occasions apparently registered and voted in both the village and Brooklyn.

Hmm, makes me wonder about that voter fraud in the recent English 'snap' election that saw May--loyal to Israel and Jews over the English--win narrowly and now reports are coming out of some voting twice.

When not fighting among themselves, they breed like rabbits and since they seem to be allergic to actual work, they sponge off American taxpayers, just like Israel:


62 percent of the local families live below poverty level and rely heavily on public assistance [government welfare], which is another sore point among those who live in neighboring communities.

Even though they're in violation of the Establishment Clause of the 1st Amendment, allowing only ONE type of religious nuts attend their public school, they don't care, they just keep filing law suits until the Feds come in and build another school for the GOY kids. The Chosen boys also bitched about riding in a school bus driven by a GASP! woman.

No exaggeration here, but 90% of the Hasidic community that I have dealt with were all on Medicaid. Why? Some say they’re the richest people around. They buy land all over. They practically own all of Monroe, NY. Are they really disabled? Or is it about money? If they have so much money, then why do they need Medicaid and welfare?

"Kiryas Joel residents have been alleged to cheat on taxes by claiming that they have a temple, or a place of worship, in their homes. Obtaining tax relief as a house of worship means the property is excused from paying property taxes that support local services, such as public schools, roads, water and sewer, fire and police, and so on, including the funds which subsidize welfare payments.

"Federal agents converged on the upstate chasidic community of Kiryas Joel last Thursday, sealing off part of the community in an early morning raid to catch an alleged ring of swindlers.The agents arrested nine men, including Mordechai Samet, 40, the alleged ringleader, and later charged 14 people with a total of 68 counts of cheating individuals, banks, insurance companies and the government out of millions of dollars.

Prosecutors say the arrests stemmed from a two-year investigation and that the men, whom they referred to as the Samet Group, created “an elaborate web of false information to carry out” frauds. The men allegedly created phony identities, fraudulent social security numbers and tax identification numbers in order to obtain benefits for non-existent people. Members of the group were also charged with scheming to obtain over $1 million in fraudulent small business loans, defrauding banks by using counterfeit checks totaling $6 million, and various schemes to defraud life insurance companies, and with credit card fraud stemming from an alleged pyramid scheme.

This is ONE community in ONE state, riddled with these welfare chiselers and con artists who steal from Americans forced to work all their life only to hear POS House and Senate members squeal that "We don't have enough money to pay back your Social Security," yet they never bother to investigate these professional thieves.

Multiply this nation-wide fraud by about 50,000 and you'll get an inkling of how much these parasites STEAL from Americans each year, like across the river in New Jersey: 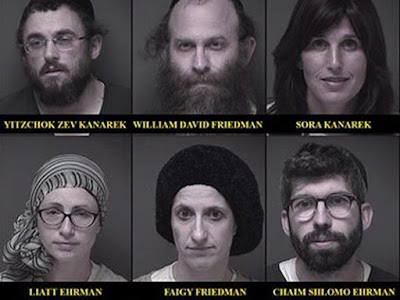 LAKEWOOD, N.J. — Nearly 15 people have been arrested in raids over two days in a New Jersey community in connection with an ongoing investigation that has so far exposed about $2 million in alleged public-assistance fraud in the town. The six people are accused of defrauding the government of just more than $670,000, according to the prosecutor's office. Arrested Tuesday were: Yitzchok and Sora Kanarek; Chaim and Liatt Ehrman; and William and Faigy Friedman.

Yitzchok Kanarek is the former rabbi of Oros Yisroel, a school for special-needs students that closed in 2015 because of federal and state tax liens of more than $295,000, according to public records. The six people arrested Tuesday are accused of under-reporting their incomes over a period of several years to collect public-assistance benefits they weren’t entitled to receive.

Wonder how many of these thieves also got money from their other racket, the world-wide con AKA Holocau$t™? Loot which is EXEMPT from being reported to the tax or other authorities, since these darlings are in such pain!

Naturally, there's always the 'anti-Semite' card to play, why those nasty prosecutors just had it in for us devout Jews, trying to raise our kids and now, they want to take back what we stole.

When not screaming anti-Semitism, the local Rabbi likes to molest 8 yo boys.

If you want to see a Rabbi perv in action, go to the 2:30 mark in this video:

Wonder where that Rabbi got his love for little boys from?

Instead of doing some self-reflecting and thinking, "Maybe we should change our thieving ways" the Chosen Ones choose censorship to keep their GOY slaves dumded down and ready for slaughter! All this blubbering about censoring FAKE news is a front, what they really want to do is to keep stories like this one from being seen, so the Chosen Ones can go on their merry way of robbing us GOYIM blind. Why their G-d says it's the Kosher thing to do!

From the Jews MOST holy book, the Talmud:
In Babha Kama (113b) it says: "It is permitted to deceive a Goi." (A GOI is all Gentiles or marks to the Jews)

There smarty pants, the Chosen Ones G-d says they can steal, lie and defraud us GOY, it's Kosher, so they better let these thieves and racketeers go free, or else their G-d will be mightily PO!
Posted by Greg Bacon at 9:12 AM