Another Trip Thru HoloHOAX Land!

This pic says a lot! Especially when one considers that these world-class CON ARTISTS are now demanding some kind of compensation for their fucking grandkids, who claim to be traumatized by the breast milk they got from their Mommies, who were traumatized by their con artist parents whining about the Holocau$t™ Unfucking believable.

"Oh grandad, that is so horrible, it will give me nightmares, thinking that G-d's Chosen Ones had to do grunt work!" 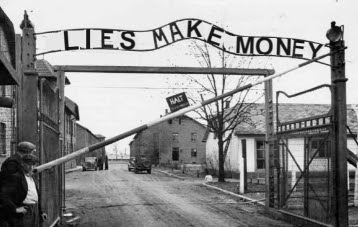 The TRUTH is that no Juden--or anyone else--was gassed at the slave labor camps, it's a lie, even though you've heard it at least SIX MILLION times. Repeating a lie doesn't make it true, just more believable.

But it's still a LIE.

Jew Inc and the Holocau$t™ Junkies tried this six million LIES in the past, but it didn't sell. 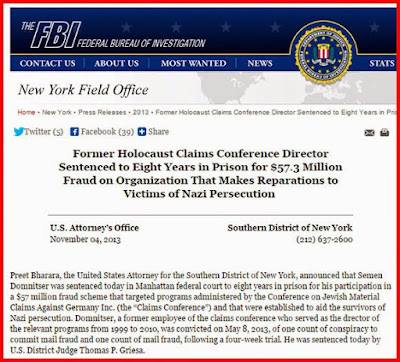 But if they scream loud enough and accuse one of being a Jew-hating anti-Semite, that alone will make most people slink away from their rantings. 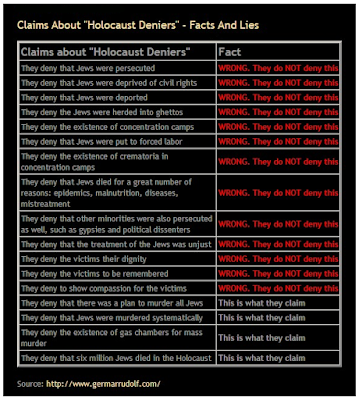 Typhus was the main culprit, which usually raises its deathly head anywhere war has broken out, killing more that the bombs, bullets and shells.


When American and British forces overran western and central Germany in the spring of 1945, they were followed by troops charged with discovering and securing any evidence of German war crimes.

Among them was Dr. Charles Larson, one of America's leading forensic pathologists, who was assigned to the US Army's Judge Advocate General's Department. As part of a US War Crimes Investigation Team, Dr. Larson performed autopsies at Dachau and some twenty other German camps, examining on some days more than 100 corpses. After his grim work at Dachau, he was questioned for three days by US Army prosecutors. [1]

Dr. Larson's findings? In an 1980 newspaper interview he said: "What we've heard is that six million Jews were exterminated. Part of that is a hoax." [2] And what part was the hoax? Dr. Larson, who told his biographer that to his knowledge he "was the only forensic pathologist on duty in the entire European Theater" of Allied military operations, [3] confirmed that "never was a case of poison gas uncovered." [4]

So when some Holocau$t™ Junkie/Tribe member starts screaming that YOU'RE the problem because you don't buy their BS, ask them why Jews got kicked out of over 100 nations--some twice--over the centuries. 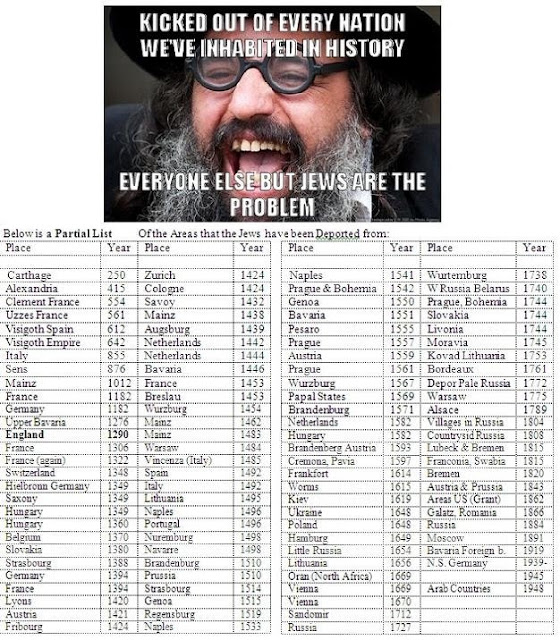 From the trial of Ernst Zündel, formally a political prisoner of Canada, the United States and Germany, Emil Lachout read the following evidence from a Circular Letter of the Military Police Service dated October 1, 1948:

1. The Allied Commissions of Inquiry have so far established that no people were killed by poison gas in the following concentration camps: Bergen-Belsen, Buchenwald, Dachau, Flossenbürg, Gross-Rosen, Mauthausen and its satellite camps, Natzweiler, Neuengamme, Niederhagen (Wewelsburg), Ravensbrück, Sachsenhausen, Stutthof, Theresienstadt.

In those cases, it has been possible to prove that confessions had been extracted by tortures and that testimonies were false.

This must be taken into account when conducting investigations and interrogations with respect to war crimes.

The result of this investigation should be brought to the cognizance of former concentration camp inmates who at the time of the hearings testified on the murder of people, especially Jews, with poison gas in those concentration camps. Should they insist on their statements, charges are to be brought against them for making false statements.

If you're a believer in TRUTH and FREE SPEECH, then visit the site of Ernest Zundel, hounded by Das Juden and the high priests of the Holocau$t™ for decades. He survived prison, beatings, his house being blown up and other calamities, all for telling the TRUTH.. the holocaust is the BIGGEST FRAUD of the 20th Century. 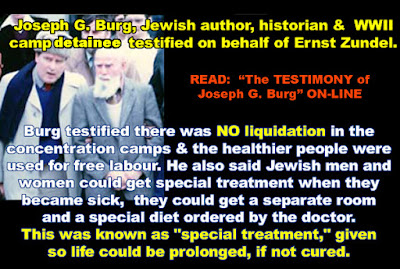 Testimony of Joseph G. Burg (Mr. Burg was a German Jew author who testified in the Second Great Holocaust Trial of Ernst Zündel some 30 years ago.)

"The Gestapo had a department called the Stachel (barb), composed of Jewish agents who spied on fellow Jews who were hoarding and black marketeering. The agent received a reward in the form of a percentage of the value of any contraband he discovered. Wiesenthal was such an agent." An Interview With JOSEF GINSBURG by Eric Thomson

Burg had spoken to hundreds of people who had been in Auschwitz and had visited the camp in the fall of 1945. Burg had wanted to see the crematoria, the hospitals, and in particular, a large new bakery. He also wanted to find the gas chambers although at that time gassings were not yet in fashion. He did not find any gas chambers. Burg formed the opinion that there were no "extermination" camps at all, that gas chambers had never existed and that there had been no plan to exterminate the Jews of Europe.[Joseph G. Burg] The 'False News' Trial of Ernst Zündel -- 1988

Burg also visited Majdanek three times. He did find gas chambers in Majdanek, but testified that they were disinfection gas chambers for liquidating lice and fleas: bugs which caused epidemics. The chambers were standard in each camp and had the German words "Attention! Poisonous Gas!" under a death skull. Zyklon B was the new formula used to disinfect the clothing. It destroyed the bugs but not the fabric. (25-6839)
After the war, Burg heard a lot about the allegations that people were gassed at Auschwitz and Majdanek. He proved that it was either out of stupidity or propaganda. Up to now, he pointed out, no document had been found showing who gave the order for gassings, who built them and where they were built. The German authorities especially had been called the "super-bureaucracism." It therefore couldn't be that after all these years not a document could be found. (25 6840) [Joseph G. Burg] The 'False News' Trial of Ernst Zündel -- 1988 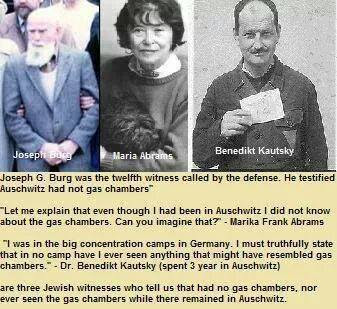 Burg testified that he spoke to hundreds of people who serviced and operated the crematoria but the people who operated gas chambers were impossible to find. Nobody had published anything in which it was claimed that he worked in a gassing institution for human beings. There was literature about gassing that was completely contradictory. Why? Because it was all made up. These opinions were published in his books. (25-6840)
....In every camp there were crematoria. It was a practical issue. People died. When the Germans occupied the eastern territories, the huge camps were established and there were larger and more crematoria as the war progressed. Epidemics broke out causing an increased number of deaths. The question of crematoria was one of hygiene: the process was more hygienic than burial and took less space. (26-6897, 6898)
....Like all other activities in the camp, the inmates looked after the crematoria. It was the most difficult work because of the heat and the lifting of corpses into the ovens. The inmates worked very often in three shifts around the clock. (26-6998) These workers did it voluntarily. They were asked by the Jewish council or the Jewish police. It was important to ask how the Jewish council or police co-operated with the German SS. (26-6900) [Joseph G. Burg] The 'False News' Trial of Ernst Zündel -- 1988

In 1946 Burg attended the Nuremberg trials at times when matters involving Jews were being raised. During one of these attendances he met Ilya Ehrenburg and a Jewish publisher who had been in Auschwitz for several years. Burg asked the publisher whether he had seen any gassing institutions for human beings and he said no. Ehrenburg, who had been the head of propaganda for the Red Army during the war, told Burg he had been to Auschwitz but he too had not seen anything of gassings. Burg had discussed this information with Zündel in general. (25-6857, 6858) Burg could not understand the emphasis on gassings. (26-6904) [Joseph G. Burg] The 'False News' Trial of Ernst Zündel -- 1988

Burg had discovered that the German Zionist leaders requested as early as 1933 that the Jews be required to wear the yellow star. The Zionists saw it not as an insult but as a heroic gesture, just like the SS wore the swastika. In 1938 the director of the Zionist movement in the Third Reich brought about the wearing of the yellow star by the Jews against the wishes of both Goering and Goebbels. (25-6850) [Joseph G. Burg] The 'False News' Trial of Ernst Zündel -- 1988

Until the TRUTH is finally outed, not only about the PHONY holoHOAX FRAUD but also the Israeli masterminded 9/11 False Flag, there will be no peace, only endless wars; the police state will keep growing and what's left of our liberties will be crushed, all in the name of making us safe..from WHAT?