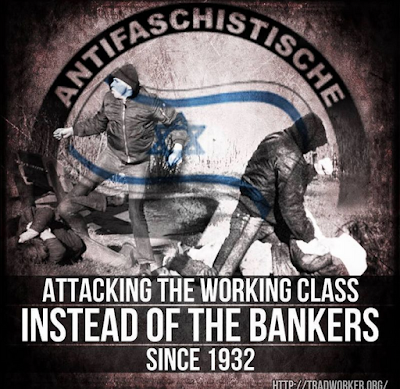 "...on September 11 Congress unanimously approved a Joint Resolution which could well provide legal cover for suppressing the entire Dissident Right. Only President Trump, in his inarticulate but undeniably admirable way, offered any resistance.

The Joint Resolution condemned “White nationalists, White supremacists, the Ku Klux Klan, neo-Nazis, and other hate groups,” blaming these groups for the “violence and domestic terrorist attack” that it alleged (despite mounting Narrative Collapse) took place at the Unite The Right rally in Charlottesville, Virginia. It looked like it could have been written by the Southern Poverty Law Center. Perhaps it was.

Needless to say, the Resolution did not condemn the Antifa terrorists who actually created the violence in Charlottesville. Indeed, as this is written, St. Louis continues to suffer from riots by Black Lives Matter and Antifa—to the complete indifference of the Main Stream Media."

The SPLC is led by Jews. Ditto for the ADL, which Google and FAKEBOOK have brought on-board to help them identify--in their warped minds--who the haters are. But only those on the Alt Right, as SPLC has yet to identify any of those violent Antifa thugs as haters in their maps.

Then there's the American Jews who are pushing the USA into endless ME wars, wars against nations Israel doesn't like and wants to wipe off the face of the Earth, so they get their American colony to do the dirty work.


Anytime a Congressional resolution gets a unanimous nod, you can bet the farm that another Jew outfit, AIPAC, was behind the measure.

Add this up and its easy to see that America is nothing more than a slave to Israel; a colony to be used to fight wars for Apartheid and help the Khazars steal more land, while pleading that it's those nasty Arabs fault, they all hate poor widdle Israel, while at the same time American and Israeli Jews in NYC steal Americans blind thru their Wall Street con games.
Here in the USA, anyone who questions this lopsided arrangement will be branded a hater and either censored offline or beat up in the streets while cops stand by and do nothing.

Israel is now only PO that their Yinon plan to bust up the ME for Israel's benefit is stalled in Syria, they're also getting nervous that each day, more and more people realize that Israel masterminded the 9/11 False Flag. They're getting proactive, trying to get ahead of this truth by tearing Americans apart, turning the nation into one of haters fighting among ourselves.

DON'T fall for the Zionist hate machine. Keep your eyes on the truth, that Zionist Jews did 9/11 and that Israel is not our friend or ally, but our worst enemy.


The 6 Worst Defenses of Communism Published By the NY Times This Year
Posted by Greg Bacon at 9:06 AM