3 BUTCHERS in a Row Which 1 has Killed More People, Do U KNOW? 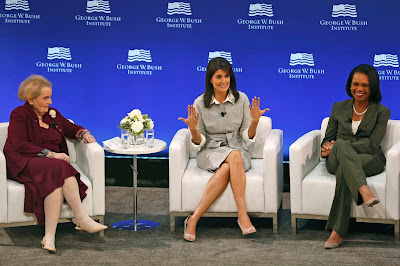 What a Murderer's Row, Bloody Maddy, Nutty Nikki and Crazy Condi. Typhoid Mary is in the Bush leagues compared to these blood-soaked maniacs.

At this time, the award for slaughtering the most people, namely Muslims, has to go to Crazy Condi, who lovingly assisted her bat-shit crazy president GW Bush, in launching the long-planned Zionist War of Terror against the Islamic world, resulting in the deaths of millions and millions, with millions more scheduled for the butcher's knife. All made possible by the Israeli masterminded 9/11 False Flag.

Coming in close second is the butcher Bloody Maddy, who goes orgasmic anytime she hears about Muslims getting slaughtered.


But none of these butchers can match the Grand Dame of Murder,the Mistress of Mayhem, that psycho bitch everyone either loves or hates, Hillary Clinton!


But don't give up on Nutty Nikki just yet, it's early in her career and between being a pathological liar who believes her own Bullshit to being a rabid Israeli-First war monger, chomping at the bit to attack Iran, Nutty Nikki might yet capture the top spot!

Back in 2000, Zionist Jews had infested every organ of the USG, shaping policy to Israel's benefit. Do you think the number of Jews in the USG has dropped or grown since then?