"To plunder, to slaughter, to steal, these things they misname empire; and where they make a wilderness, they call it peace." - Tacitus

60 as in the number killed in the Las Vegas False Flag massacre versus 445, which is the number of Muslims/Arabs--even Christians--the USA has murdered EVERY day for the last 16 years, since the Israeli masterminded 9/11 False Flag.

Got that 445 number by multiplying the years since the 9/11 False Flag--16--by the number of days in a year, 365, then taking that number 5,840 and dividing that into the approximate number of Muslims we've butchered since 9/11 in Afghanistan, Iraq, Libya and Syria, which is about 2,600,000. The exact number we've murdered is impossible to pin down, due to the broken infrastructure and destroyed society in those nations. If it was closer to five million, it wouldn't be a surprise.

Some sites say the death toll if around 1.3 million, "The report only focused on deaths in conflicts in Afghanistan, Pakistan and Iraq, and excluded U.S.-led military operations in countries such as Libya, Somalia and Yemen."

But that is nearly three years old and omits those butchered in Libya, Somalia and Yemen, and doesn't even mention the ISIS led invasion of Syria, so we're going to discount their number. Also left out is the state-approved propaganda outlet Wikipedia.

Some say that we've murdered over 4 million Muslims since 1990, but for this blog, I'll stick to the 9/11 False Flag and go from there.

"JustForeignPolicy" puts the number of Iraqis murdered since 2003 at over 1.4 million.

For Afghanistan, it was difficult to get the approximate number of Afghans murdered since October 2001. You'll find plenty of sites cheer leading for more war and fear mongering to keep these wars 'hot,' but good luck trying to find the number of Afghans killed by the USA.

The best number I could come up with is over 200,000 Afghans killed by the USA since the October 2001 invasion. Add in the number that died from the effects of this illegal war, from starvation, lack of clean drinking water and lack of medicines and that number is probably closer to 400,000.

In Libya, the initial 'No Fly Zone' NATO and USA bombing campaign killed close to 50,000 and that nation has been engulfed in various civil wars since 2011. Add in the busted-up infrastructure, which was superb and the loss of lives again to starvation, deprivation and the civil wars--result of the NATO bombing campaign--the number of murdered Libyans is probably around 300,000.

In Syria, what the MSM calls a civil war, which is a bald-faced lie. Syria was invaded by a thuggish collection of al CIA Duh and ISIS terrorists, trained, armed, funded, transported and given air cover by the USA, Israel and a few other Zionist lackeys, and her death toll is probably over 500,000 and climbing. If we could add in the number killed indirectly, it would probably climb to over one million, but we'll stick to 500K for this blog.

Adding up the number murdered in Afghanistan, Iraq, Libya and Syria comes to 2.6 million, divided by 5840 which equals 445. 445 Muslims/Arabs murdered each and every day in those ME and African nations, and that doesn't count the number butchered in Yemen, Somalia, Niger, Sudan and other nations that we've sent in our SEAL and Green Beret assassin teams.

Why all this madness?


Many seasoned experts believe that without the influence of the Israel Lobby, particularly as exerted by the Jewish Neoconservatives, the United States would not have been at war in the Middle East and North Africa for the last 16 years. These wars have done nothing for the US but harm, and they have cost taxpayers trillions of dollars and caused extensive death and destruction in seven countries and a massive refugee flow into Europe.

If the brutal murder of 60 Americans gets the nation in a self-pitying tizzy, imagine our mental state if 445 Americans were murdered each and every day by the same thugs who did Las Vegas and 9/11.

To those who think Trump will save us from this Kosher Swamp, think again. 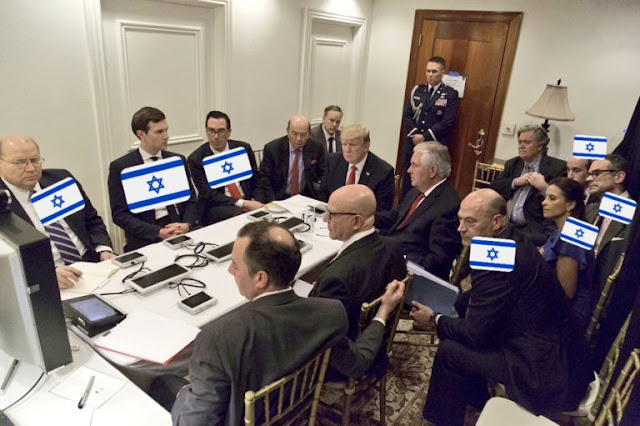