"Deception is a state of mind and the mind of the state" James Jesus Angleton, former CIA head


According to The National Association for Amateur Radio (ARRL), elements of the US Department of Defense (DOD) will simulate a “communications interoperability” training exercise across the United States on November 04-06. The announcement released on October 24 has not been widely distributed to the media, because the drill is simulating a total grid collapse and could spark public fear.

“This exercise will begin with a national massive coronal mass ejection event which will impact the national power grid as well as all forms of traditional communication, including landline telephone, cellphone, satellite, and Internet connectivity."

Notice that one of the places the Antifa terrorists plan to create terror is Omaha, Nebraska, home to the Offut United States Strategic Command (USSTRATCOM) base, where they have some interesting missions, such as:The 55 Wing (WG) mission is to "provide dominant intelligence, surveillance, reconnaissance; electronic attack; command and control; and precision awareness to national leadership and warfighters across the spectrum of conflict any time, any place. "

The kind of intelligence Commie loving Antifa thugs need to overthrow our nation?

If you want to check out the Antifa Terrorist page, click her:

I have a question about the Antifa thugs; When Dear Leader Obama was illegally waging wars and starting new illegal ones, killings hundreds of thousands of Muslims and Arabs, why didn't Antifa raise hell then? Or when he was illegally enlarging the NSA spy powers? Or using drones in record numbers to murder people w/o a trial or even a hearing in court. And why do I get the feeling that if the Killer Queen had stolen the WH, we wouldn't be hearing all this bitching from some George Soros backed shock troops?


The bottom line: The United States government is quietly preparing for a major space-weather event to paralyze communication systems and energy grids across the entire country. As a citizen, you’re not allowed to know this knowledge and frankly you will not be prepared—only the government will be. The writing is on the wall of what is coming through an executive order and DOD drills.

No wonder public trust with government is at historic lows, because you’re not allowed to know the truth.

Simultaneously, the wealthiest families who own mega corporations in the United States are plowing millions into their proxy armies called community organizing groups. Let’s just hope, a coronal mass ejection doesn’t occur when these severely misguided folks are protesting.

Why do these EMP stories always have the central part of the USA getting hit? Why not show a map of one over Wall Street or Silicon Valley or Tel Aviv?
One thing I know for certain, if one does detonate over the USA, it will have a Star of David on its casing. 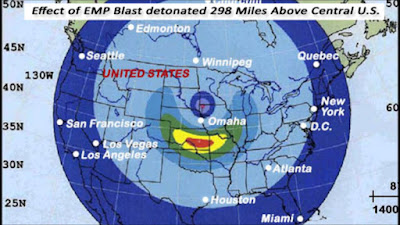 Another interesting bit of info about Offut is that is one of the Pentagon bases then President GW Bush flew to on 9/11, when he was hiding from his (((al CIA Duh))) buddies. And it just so happens that on that same day, some really rich and powerful fucks were having a meeting at Offut, like Warren Buffet and Ann Tatlock, the CEO of Fiduciary Trust Co. International. Now what made Mrs. Tatlock such a lucky person for being invited to this charity event that morning? Mrs. Tatlock not only works in the World Trade Center, but her offices were right where Flight 175 crashed into the WTC 2.


So was it just a coincidence that the 2nd richest man in the world was hosting his "last" annual golf charity event that particular morning at U.S. Strategic Command headquarters and what are the odds that a CEO was invited who's offices were right where one of the hijacked airplanes crashed into?

Some immediate questions that arise from this charity event:

2. Who were the celebrities, professional athletes, and the rest of the business leaders that attended, why were they invited, and who invited them? Did any of the other CEO's invited to this charity event work at the WTC?

3. Why was this the "last" annual golf charity event Mr. Buffett was going to host?

An interesting angle about Ann Tatlock's company, Fiduciary Trust Co. International, is that President Bush's nominee to head the panel that's investigating the Sept. 11, 2001 terror attacks, Thomas Kean, used to serve as the company's director which has a lot of wealthy clients.

Obviously, Offut has the background to deal with False Flags, like 9/11.

Another interesting tidbit is that the pedophiles dream, "Boys Town," is located nearby. Wonder if GW needed some 'relief' that morning, the kind of relief only a pedophile could find at Boys Town?

The following story is worth reading entirely to see how much corruption, crime, sleaziness and pedophilia is rampant in the USA.


A Conspiracy of Silence

In 1993, a film crew from Yorkshire Television in the UK travelled to Omaha, Nebraska to make a documentary about a pedophile ring. The project was funded by the Discovery Channel and set to air in 1994 in the UK and in the United States a year later. To their horror, filmmakers uncovered a vast operation functioning throughout the country that supplied children to the wealthy and political establishment for purposes of molestation, drug trafficking, and blackmail.

The filmmakers were in the final editing stage of the documentary when the Discovery Channel suddenly withdrew support for the project. To this day the documentary remains unaired. The film told the story of Lawrence King and an alleged cover-up that reached the highest levels of big business and United States government.

Much of the documentary was based on John DeCamp’s expose, The Franklin Cover-Up. DeCamp, a seasoned attorney, highly decorated Viet Nam veteran, and former Republican Senator, explained what he uncovered,

“It’s a web of intrigue that starts in our holy of holies, Boys Town Nebraska, one of the most respected institutions in the United States, and spreads out like a spider web to Washington DC right up to the steps of the nation’s capital, steps of the Whitehouse. It involves some of the most respected and powerful and richest businessmen in this country – and the centerpiece of the entire web is the use of children for sex, drug dealing, drug couriers, and the compromising of politicians and businessmen.”

Wow, and I thought Nebraska was only good for growing corn and football lovers!


Get back in line, GOYIM!
Operation Gladio is undisputed historical fact. Gladio was part of a post-World War II program set up by the CIA and NATO supposedly to thwart future Soviet/communist invasions or influence in Italy and Western Europe. In fact, it became a state-sponsored right-wing terrorist network, involved in false flag operations and the subversion of democracy.

The main function of the Gladio-style groups, in the absence of Soviet invasion, seems to have been to discredit left-wing groups and politicians through the use of "the strategy of tension," including false-flag terrorism. The strategy of tension is a concept for control and manipulation of public opinion through the use of fear, propaganda, agents provacateurs, terrorism, etc. The aim was to instill fear into the populace while framing communist and left-wing political opponents for terrorist atrocities.