And for pointing this out, you'll get awarded the coveted anti-Semitic medal of honor!

Remember the 12th Commandment: Thou Shalt not Question Your Jewish Overlords, GOY Dog 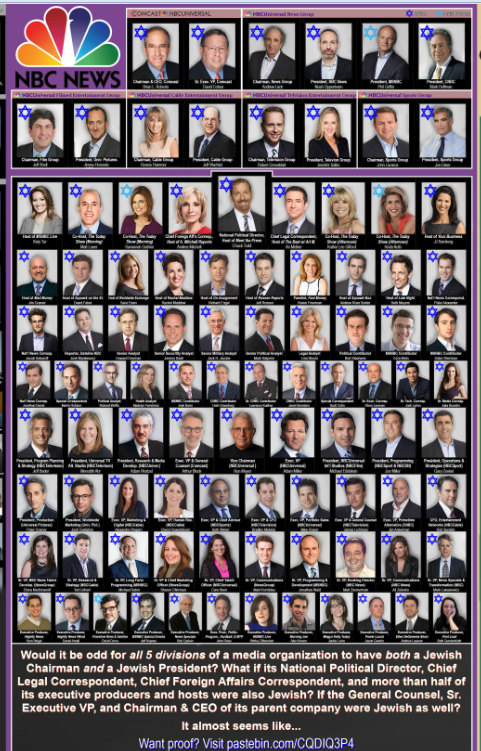 Brian L. Roberts – Chairman & Chief Executive Officer (CEO), Comcast Corporation
Brian Roberts is Chairman and Chief Executive Officer (CEO) of Comcast Corporation. [1]. Brian Roberts is Jewish. According to The Forward, a Jewish publication, Roberts is the “son of a Philadelphia Jewish entrepreneur,” Roberts hosted a bar mitzvah for his son, and Roberts has a commitment to religion and Jewish causes that “is extremely personal and low-profile,” such that Roberts Jewish identity “should not be doubted.” [2].

David Cohen - Senior Executive Vice President & Chief Lobbyist, Comcast Corporation
David Cohen is Senior Executive Vice President and the Chief Lobbyist for Comcast Corporation. [3]. David Cohen is Jewish. According to The Forward, a Jewish publication, Cohen is Jewish, and he is “a board member of the Philadelphia Jewish federation and a donor to many local and national Jewish causes.” [4]. According to the Philadelphia Inquirer, Barbara Cohen, “the mother of Comcast Corp. executive David L. Cohen… was active as a volunteer for the Jewish Federation and her synagogue.” [5].

Arthur Block – Executive Vice President, General Counsel and Secretary, Comcast Corporation
Arthur Block is Executive Vice President, General Counsel and Secretary of Comcast. [6]. Arthur Block is Jewish. Block discussed his Jewish upbringing in an interview with the Columbus Jewish Historical Society, describing how his family “always had the Kiddush in the shul” when hosting his or his brother’s bar mitzvah. [7]. The Forward, a Jewish publication, has also referred to Arthur Block as “Another key Jewish officer in the Comcast empire.” [8].

Andrew Lack – Chairman, NBC Universal News Group
Andrew Lack is the Chairman of NBC News. [13]. Andrew Lack is Jewish. Lack confirmed that he was Jewish in a speech at Boston University, stating, “Just like in ancient Egypt, it comes down to an unknown Jewish fellow to do the heavy lifting.” [14]. Lack has been honored by the United Jewish Appeal (UJA)-Federation of New York’s Broadcast, Cable & Film Division. [15]. Lack has stated that the Bronx House Jewish Community Center performs “vital work” during his visits to the Center. [16]. Jewish journalist Jeffrey Blankfort [17] has also stated that Lack is Jewish, in his publication entitled, “Stunning Jewish Success Dominates American Media.” [18]. Lack’s daughter, Joanna [19], was married in a Jewish wedding ceremony performed by Rabbi Will Berkovitz. [20].

Bonnie Hammer – Chairman, NBCUniversal Cable Entertainment (Cable Group)
Bonnie Hammer is the Chairman of NBCUniversal Cable Entertainment. [21]. Bonnie Hammer is Jewish. Hammer was featured by the Jerusalem Post (“JPost”), an Israeli-based publication, in its article on the Jewish women that were included in the Forbes' 2012 list of world’s most powerful women. [22]. JPost referred to Hammer as “one of the most powerful women in television.” [23]. Bonnie also discussed her Russian-Jewish heritage in a 2008 speech to the Anti-Defamation League, according to Variety. [24].

Mark Lazarus - Chairman, NBC Sports Group
Mark Lazarus is Chairman of NBC Broadcasting & Sports. [29]. Mark Lazarus is Jewish. Media Village has written about Lazarus’ “self-deprecating humor” about being Jewish, including Lazarus’ quip that he attended Vanderbilt University, “where the number of Jews is like the Nielsen sample, very small.” [30]. Mark is son of John Lazarus, a vice president for sales and advertising at ABC Sports. [31]. The Lazarus family has been honored by the United Jewish Appeal (UJA)-Federation of New York [32], and Jewish Voice reports that Mark Lazarus has attended UJA luncheons in the past. [33].

Noah Oppenheim – President, NBC News
Noah Oppenheim is the President of NBC News. [34]. Noah Oppenheim is Jewish. Oppenheim was featured in the American Israelite’s December 2016’s edition of Jews in the Newz, which described how Oppenhim “wrote sometimes on Jewish issues” while studying at Harvard and later went on to produce political talk shows. [35]. Noah is married to Allison Oppenheim. [36]. Noah and Allison were mentioned in the obituary for Noah’s grandmother, Elaine Nussbaum, who resided in the Jewish Home of Eastern Pennsylvania and was buried in the Dalton Jewish Cemetery. [37].

Phil Griffin – President, MSNBC
Phil Griffin is President of MSNBC. [38]. Phil Griffin’s wife, Kory Apton, is Jewish. Due to their interfaith differences, Phil and Kory were married in a non-denominational ceremony. [39]. Kory is the daughter of Erna Apton, whose funeral took place at the Frank Campbell Funeral Home [40], which the Times of Israel states is a Jewish funeral home [41], and whose husband was a plastic surgeon at the predominantly Jewish Mount Sinai Hospital (original known as the “Jews’ Hospital”). [42]. Phil and Kory’s daughter, Riley [43], has enrolled in and spoken about courses taken at Duke’s Center for Jewish Studies. [44]. Keith Apton, Kory’s brother [45], has donated to Temple Beth Shalom. [46].

More, much more at the above link.

Best have a bagel or two handy to get in good with the owners.
Posted by Greg Bacon at 11:36 AM