The Sick & Twisted Antifa Bastards are Back

Thought that since one of theirs was involved in shooting up that Texas church--authorities have since scrubbed his social media links--the twisted murderous insane fucks might lay low until next Spring, but they're back and as crazy as ever, as it looks like they were behind the Amtrak train wreck:

Evidence has emerged that violent leftist terror group Antifa was behind the derailing of the Amtrak train in Washington. The devastating crash has left several people dead after the derailed carriages fell down onto a busy highway.
Now, it appears that the George Soros-funded terrorist organization had intentionally caused the “accident” by pouring concrete onto the railway tracks.

Antifa recently called on followers to derail trains and even posted how-to guides on how to cause a train crash in Washington. In a public statement, they endorsed “pouring concrete on to train tracks to counter fracking in Olympia.”
On June 28th, ANTIFA proudly tweeted the following statement from their “official” account: “Here we endorse crimes like pouring concrete on train tracks. We also include a how-to video at bottom of article:

Where did these sick fucks get this horrible idea? From their Kosher Komrades, ISIS (Israeli Secret Intelligence Services). Antifa has even went to Syria to get training from these US/SA/Israeli backed proxy army head choppers... 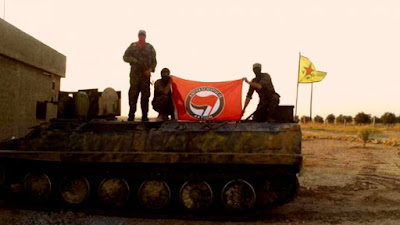 Antifa militants are crossing the Syrian border to receive military training from members of ISIS, according to intelligence reports.

American and European Antifa members are being attracted to the US-backed Kurdish People’s Protection Units (YPG) due to their anarcho-communist politics, who are in turn persuading the Antifa extremists to fight alongside them in the “Rojova revolution.”

Prisonplanet.com reports: Security agencies are concerned that these Antifa members will continue the “revolution at home” once they return. Already FBI sources have revealed Antifa literature and photos taken in the Middle East which were found in the hotel room of suspected Las Vegas shooter Stephen Paddock.

These vicious, stupid asshole punks don't realize that if they pull off their Commie takeover of the USA, that one of the first things to happen is a giant purge, as in mass murder of millions. The Commie bastards will get rid of the intelligentsia and the ones who helped them into power.

A few days ago, inspired by the Olympia train Blockade, we used copper wire to signal a blockage and disrupt rail traffic near Medford Oregon. Railways are easily accessible and everywhere. Sabotage is fun and easy.

And more from Antifa 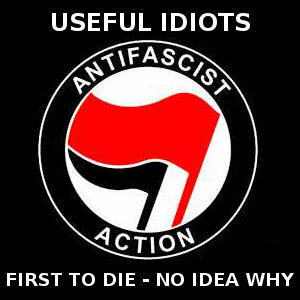 When that purge happens, idiotic Antifa types will be given a one-way ride to a nearby quarry, and given a bullet to the back of their warped minds.

The MSM is braying that it was excessive speed that caused the wreck. The same MSM that swore Saddam had WMD's, Qaddafi was handing Viagra to his troops fro rape party's and that Syria's Assad was gassing his own people.