Even American Murderers Have a Conscience?

If what you've been doing and or doing now is making your life such a hell, you're turning to drinks and maybe drugs to fog your mind into a permanent haze, then you do have a conscience. The question is, will you listen to it and stop doing that which is turning you into a drunken zombie? 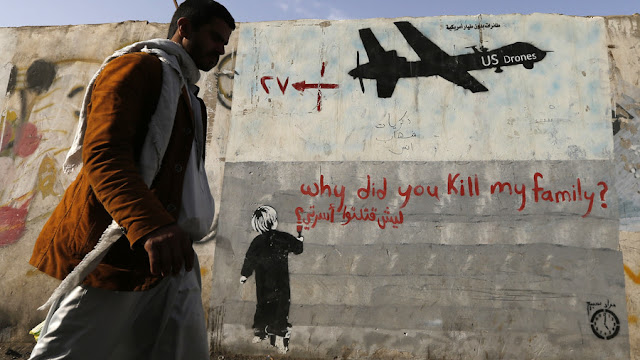 Killers, drinkers & traumatized for life: What it means to be a US drone operator in ‘war on terror’

They sit in rooms resembling hi-tech shipping containers. Joysticks in hand, they spend hours watching grainy screens, displaying people in faraway lands going about their daily life — and they hold life and death in their hands.

They are the men and women who operate the United States’ controversial drone warfare program — and they frequently get it disastrously wrong.

A newly-released report by the Associated Press claims that one third of people killed by US drones in Yemen this year were civilians with no association to terror groups like Al-Qaeda, the intended targets.

But intention and reality often diverge sharply when it comes to death by US drones — and the horror is not confined to Yemen. From Pakistan to Afghanistan, to Iraq, Syria and Somalia, US drone strikes — which are often hailed by the US military and government as “precise” and even “surgical” — have killed scores of innocent civilians.

In recent years, multiple whistleblowers — former drone technicians, camera operators and image analysts — have come forward to shed light on the horror and reality of what US drone bombing really entails. Perhaps an indicator of the level of stress involved, the people who do these jobs also quit them in record numbers. In 2015, an internal Air Force memo published by the Daily Beast revealed that there was a serious “outflow” problem with drone pilots due to the “unrelenting pace of operations.” Even when the Air Force began to offer six-figure salaries, it did not stem the outflow from the program.

But long, arduous shifts and high pressure are just the “official” explanations for the outflow problem, Laurie Calhoun, the author of ‘We Kill Because We Can’, an in-depth look at the US’ drone war, told RT.

"Apostate operators and sensors have become disenchanted with the profession and are plagued by feelings of regret and guilt for having agreed to kill on command people who never threatened them personally with death."

In the drone age, Calhoun says, while the operators risk no physical harm, the explanation for their PTSD must derive from “moral factors.”

What's that? Even offering service personnel six figure salaries to kill people who they don't know, who are NO threat to either them or their boss still doesn't keep them from quitting? Not as much fun as those grisly video games where you get to kill digital people?

At times, the Wheel of Karma might turn slowly, but when it finally lands on the USA, there's going to be Hell to pay for Americans, and it won't matter if you're in your 5th Avenue 'panic room' or on the streets, we're going to find out first-hand what we've been doing to others for decades.

As for the AP report, I bet the numbers were flipped. It's probably more likely that 2/3d's of those we're killing were innocent. And actually, without an official declaration of war--which Congress hasn't passed since December 1941--then it means that ALL of those we've buttered were innocent.