What happens when you write TRUTHS about the PHONY Holocau$t™ 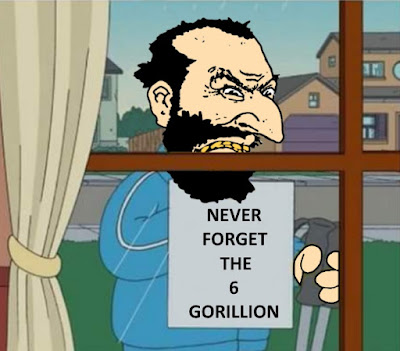 Jew Inc chases you down as if you were a rabid dog. And in their hateful, delusional eyes, your are, so you must pay the price.

Like author David Irving, whom Jew Inc has been hounding for decades. Trials, harassment, stalking, fines, theft of property over some bogus trial, presided over by a judge who was either an imbecile, bought off or both. The financial prices he paid pales in comparison to the personal tragedies from Jew Inc's malevolent ways.

Read it in his words:

This is my regular letter to supporters. Thank you for giving me your brave support over these months. I am writing to each of you to thank you for buying my books or sending links, donating or otherwise helping to keep the engines churning in the face of the increasing attack, by every subtle means, of those people I call “the traditional enemies of free speech”. They now cast themselves as helpless victims, who (despite their notoriously dual loyalties) could never have expected what would happen to them in war.

Prevented by a voice indisposition, I have been unable to visit my friends and readers across the United States as often as I wanted. I shall come in 2019. Meanwhile, more and more college students and teenagers written to me, having heard me speak me on YouTube. (What a vast outreach YouTube has!)

The enemy is changing shape and battlefields: The foes are always the same, and not always Jews; well-meaning ‘allies’ can be more predatory, as we British found out in 1940. I am somehow reminded of the great World War I cartoon by William Bairnsfather, about Old Bill, who snarls at his neighbour in the shell hole, “Well, if you knows of a better ’ole, go to it!”

I think my progress report is impressive: I’m still standing, I am continuing to research, write, and print my books, and now I am adding to my bookstore those by my late father, a commander in the British navy; both my brothers were officers in the Royal air force, I too volunteered. Besides my writing, each summer like the last, for fifteen years or more I have taken a group of twenty guests to Latvia, Lithuania, and Poland to show them the Real History sites where Germany fought the former Soviet Union - a country which in 1941 had been secretly raising three great new attack armies, to invade westwards swallowing all Europe, as we are only now finding out. Hitler stopped them.

We have sold the last copies of my flagship 1975 book Hitler’s War, and I have spent months preparing a new edition, rebuilding its picture section, and will send it out as soon as it comes from the printers. It confronts me with problems of raising capital.

The ugly past continues. As you probably know, I sued Deborah Lipstadt, a Georgia religious teacher, in defamation. The novice British Judge, Sir Charles Gray, accused me fearfully in his Judgment – without evidence – of “Holocaust denial” whatever that means; although he found in that judgment that Lipstadt had told five lies about me in her book, including destroying wartime records in a Russian archives, he declared mystifyingly that her defence succeeded.

My own circumstances are necessarily reduced: After that Trial, the authorities seized my bank accounts and assets, including my big home in Mayfair, with all my archives and furniture, where I had lived for forty years and raised two families - five daughters. I fought the authorities single-handed and obliged them to return my archives but then I lost its picturesque successor, Lake End House in Windsor, because of a hacking.

At the great trial of Lipstadt which I had fought for over three months in Britain’s same high court against the money of men like Stephen Spielberg, their “expert witnesses” marched into Court by column of four, to perjure themselves and lie, as we now know; Hollywood’s Harvey Weinsteins went on to make a scurrilous movie about their “triumph” -- too late, as by then all my family had escaped to adulthood.

The youngest daughter has now gone on to earn a Master’s degree with Distinction at London University. (She is far cleverer than I, I am proud to say.) My oldest died a suicide a few days before the trial began (while Lipstadt’s lawyers mocked and made gloating comparisons, Lipstadt herself shamelessly bragged to an Israeli audience, in the Yiddish she had brought from Queens, NY, “Ve did all ve could to destabilise David Irving before my trial began.”)

Under the same alien pressures, PayPal canceled my account, so now I pay a forty-dollar U.S. bank fee to send money to my children; eBay bans my books, and with wanton grammar lapses uses the passive voice to tell people that “books by David Irving is [sic] considered to be a form of propaganda”. So it goes on ad nauseam, but let me wish you and your family a jolly Thanksgiving season, and thank you once again for your unwavering support.

Yours very sincerely,
Your friend,