One of the NZ Shooters Fled to Israel, Got help from Aides? With UPDATE

Why am I not surprised?

The fifth suspect of Christchurch shootings has defected to Israel

Meanwhile, Israel has been using the NZ shooting to bomb the hell out of Gaza. Why am I not surprised again?

Israel has launched air attacks on Gaza hours after rockets were allegedly fired near Tel Aviv, raising fears of a major escalation in the Israeli-Palestinian conflict...
The Israeli military, in a post on Twitter, said it targeted 100 Hamas targets in Gaza, including an office complex used to plan and command the group's activities, an underground complex that served as its main-rocket manufacturing site, and a centre used for drone development.

Allegedly? Either they were fired or not. And if they were fired, you can bet a dozen bagels it was some Shin Bet types doing the dirty work to give Israel the excuse it wants to carpet-bomb Gaza.

Israeli CRIME MINISTER is using this to rally Israeli's to his cause, to vote in the corrupt SOB one more time. 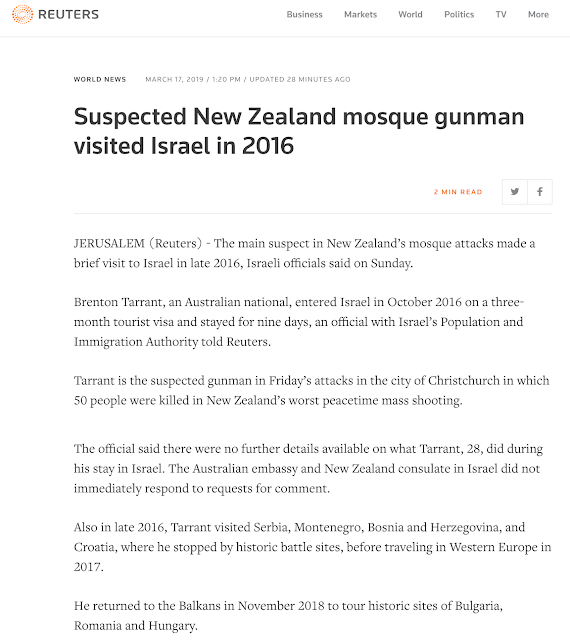 1. Who paid for his travel to Israel--and elsewhere?

2. Was Tarrant's visit to Israel his 'Birthright Trip,' where Jews visit the Mothership to see in person how efficient Israeli's are with apartheid and hatred for non-Jews?
Posted by Greg Bacon at 9:54 AM