Yes, I'm aware of the speculations that Churchill might be descended from Jews on his mother's side, but that's not definite.

It might sound preposterous to claim that a drunkard like Churchill was able to kick-start WWII, but not if you read David Irving's excellent "Churchill's War: The Struggle for Power." Irving's a meticulous researcher, as evidenced by the 85 pages--that have source notes on both sides of the page--to provide the evidence he exposes in the 591 pages of the book. (Irving was also arrested for a Thought Crime violation, for daring to ask historical questions about WWII. For being uppity, Irving spent 13 months in solitary confinement.)

Not only was Churchill's alcohol intake legendary, his love of the good life is also evident. Although Churchill had a decent income from his writings, his expense nearly always exceeded his income. For example, the country mansion he bought, Chartwell, was staffed with 15 servants. Churchill also loved to gamble on the Rivera casinos, using--as he told his wife--other people's money.

But Churchill had some very wealthy (((friends)) who bailed him out of his financial difficulties and more (((friends))) on Fleet Street, the home of England's press empires.

The Jews wanted WWII since they knew that Britain would have to pull the two divisions out of Palestine that were there to maintain, or at least try to maintain, peace between the indigenous Palestinians and the invading horde of Jews who were pouring into Palestine. Getting ready for the day that WWII would start, the Jews had amassed around 75,000 Juden who were arming themselves, under the pretense of fighting in the war, but were actually used to kill Palestinians and steal their land.

When Hitler first came to power, Churchill was an admirer of Fascism, both in Italy and Germany and made statements to the effect that England should ally with Germany to form a bulwark against Communism. A few years--and many tens of thousands of pounds later--Churchill was against Germany and wanted to ally with the USSR to form a bulwark against Fascism.

But all of his efforts weren't for Jew Inc alone. Churchill had a thirst for power as addictive as his thirst for booze and knew that if a world war erupted, he'd get promoted to #10 Downing. 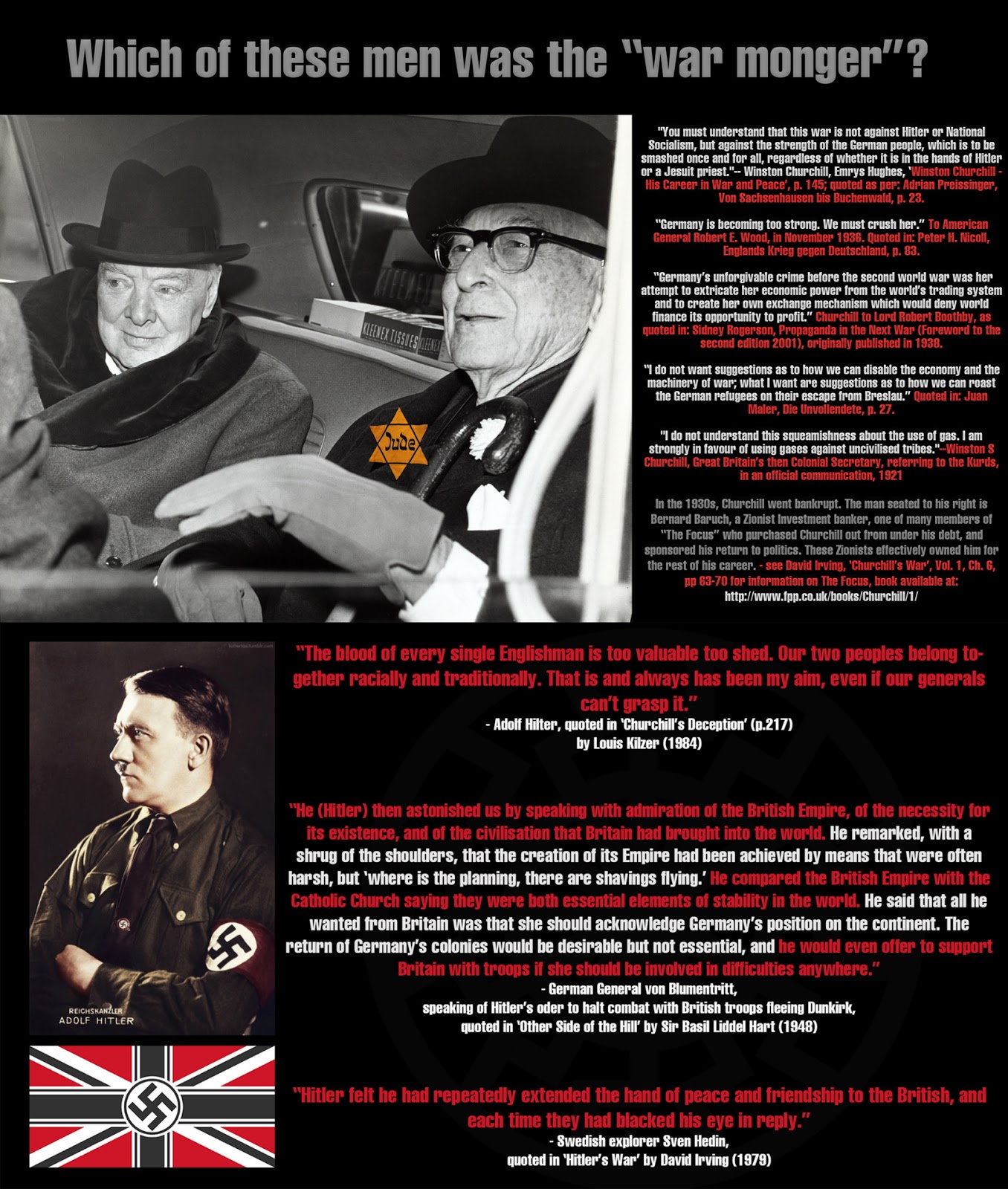 “To put things in plain language, during the years leading up to the Second World War, both Churchill and numerous other fellow British MPs were regularly receiving sizable financial stipends—cash bribes—from Jewish and Czech sources in exchange for promoting a policy of extreme hostility toward the German government and actually advocating war. The sums involved were quite considerable, with the Czech government alone probably making payments that amounted to tens of millions of dollars in present-day money to British elected officials, publishers, and journalists working to overturn the official peace policy of their existing government. A particularly notable instance occurred in early 1938 when Churchill suddenly lost all his accumulated wealth in a foolish gamble on the American stock-market, and was soon forced to put his beloved country estate up for sale to avoid personal bankruptcy, only to quickly be bailed out by a foreign Jewish millionaire intent upon promoting a war against Germany. Indeed, the early stages of Churchill’s involvement in this sordid behavior are recounted in an Irving chapter aptly entitled ‘The Hired Help.’

One more thought about this book. Some, maybe many of the docs and records Irving tried to research held by Britain are even now, over 80 years later, still deemed VERBOTEN. Why is that, when the individuals involved are all long dead. But there is one group of (((people)))that still maintain a death-grip over England and probably don't want details of their involvement in helping start WWII becoming public.