DNC Offers to the MSM the Winners of the Next 10 Primaries!

Chappaqua, New York--Democratic Party head Tom Perez issued a statement from the residence of our future Queen, Hillary that was aimed to clear up all the confusion regarding the vote stealing and hacking that took place during the Iowa caucuses.

This bold statement was endorsed by the Chappaqua Town Board of Lisa Katz, Lauren Levin, Jason Lichtenthal and Jeremy Saland, shortly before they took their mid-morning bagel break.

"We already have the winner that can lead this nation onto greater things than thought possible, and that is Queen Hillary, Blessed be her Name! So why go thru all this acrimonious and savage in-fighting when the leader we all need is waiting in the wings, ready to take center stage?"

Perez continued: "To ensure out Queen's ascent to the throne, we've offered to the MSM the winner of the next 10 primaries, which will make the confusion in Iowa seem sane, but it's all part of our Queen's crafty scheme to take what was stolen from her by Orange Man."

Perez added: "We will keep counting the Iowa votes until they're in the range we want, not what the idiotic voters think they want."

If no candidate wins more than 1,885 pledged delegates: This will result in a contested convention, where superdelegates are barred from voting at the first formal ballot, but regain their right to vote for their preferred presidential nominee for all subsequent ballots needed until the delegates reach a majority.

Reporting from Mort's Bagel Heaven in Chappaqua, New York, this is Sy Bergsteinowitz for ZNN. 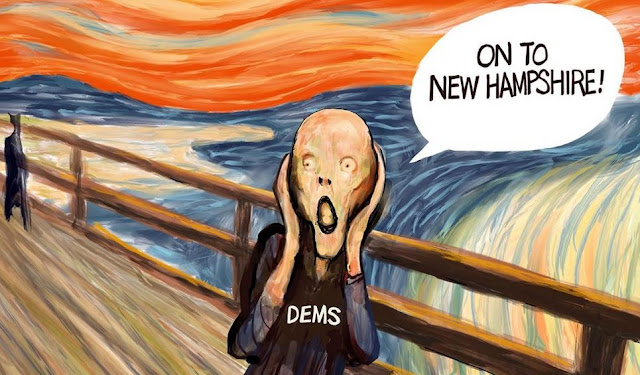 Wikipedia is already onboard with making Hillary the Supreme Ruler of the Universe, as their pages on Hillary is one big smoochie to Hillary's voluminous backside.

If the DNC wasn't so corrupt and incompetent and beholden to a narcissistic, vindictive crazy, they'd let the process play out, which means Bernie would most likely win. Then Bernie would choose Tulsi Gabbard as his VP and they'd mop the Orange Man out. Come January 2021, Cheeto, Jared the Snake and Princess Bimbo would have to find anudda' racket.