Israeli Wiretappers, the NSA, and 9/11

"Together, Verint and Amdocs form part of the backbone of the government's domestic intelligence surveillance technology. Both companies are based in Israel – having arisen to prominence from that country's cornering of the information technology market – and are heavily funded by the Israeli government, with connections to the Israeli military and Israeli intelligence (both companies have a long history of board memberships dominated by current and former Israeli military and intelligence officers). Verint is considered the world leader in "electronic interception" and hence an ideal private sector candidate for wiretap outsourcing. Amdocs is the world's largest billing service for telecommunications, with some $2.8 billion in revenues in 2007, offices worldwide, and clients that include the top 25 phone companies in the United States that together handle 90 percent of all call traffic among US residents. The companies' operations, sources suggest, have been infiltrated by freelance spies exploiting encrypted trapdoors in Verint/Amdocs technology and gathering data on Americans for transfer to Israeli intelligence and other willing customers (particularly organized crime)...

If you wanted to "escort" the 9/11 hijackers around the US, especially the ones who were from Israel, this would be the way to accomplish that deed. 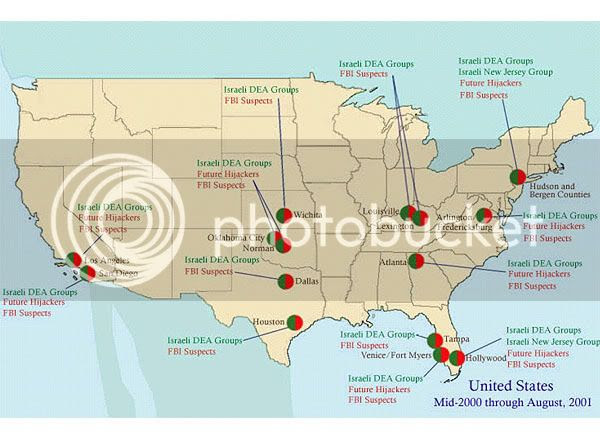 The two companies that should be getting extra scrutiny from 9/11 researchers are Amdocs, and NICE Systems. Both have direct links to 9/11 via the milieu known as the "Israeli DEA Groups." To date, the best report on the DEA Groups was assembled by retired international lawyer, Gerald Shea; you can download the report from Antiwar.com

I consider Shea's report the best so far, because it is high on content, and low on speculation, and, it names names. The content is damning. Consider the following graph from Shea which places the DEA Groups in the same general vicinity as the alleged 9/11 hijackers, in the time period running up to 9/11;

Shea on the Mossad connection, and some more on Nice systems:

"The vans in the operations of both Israeli Groups were able to move about neighborhoods without raising undue concern. The “art students” in the Israeli DEA Groups were using their vans as sometime door-to-door salesmen. The personnel of Urban Moving Systems, the Mossad front, were ostensibly driving about northeastern New Jersey towns in their van (or vans) to help people move—a familiar suburban sight.

With ample room for personnel and electronic equipment, the vans were ideal vehicles for electronic eavesdropping. The extent to which Nice Systems, the Israeli wiretapping company for which Tomer Ben Dor worked (the Israeli with the reference to “DEA Groups” in his computer files) will be a matter for the public inquiry. Nice Systems was ideally suited to provide equipment and expertise to the Israeli New Jersey Group because its U.S. headquarters were located in Rutherford, New Jersey, near the center of the Group’s operations."

And moving the shaped charges that brought down WTC 1, 2 and 7 from Dominick Suter's Urban Moving Systems to the WTC in the days leading up to 9/11?
Posted by Greg Bacon at 6:51 AM