Look around your property, maybe these WTC 'Black Box' flight recorders fell into your yard 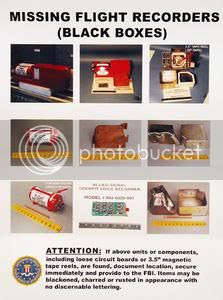 Two men who worked extensively in the wreckage of the World Trade Center claim they helped federal agents find three of the four “black boxes” from the jetliners that struck the towers on 9/11 - contradicting the official account.

Both the independent 9/11 Commission and federal authorities continue to insist that none of the four devices - a cockpit voice recorder (CVR) and flight data recorder (FDR) from the two planes - were ever found in the wreckage.

But New York City firefighter Nicholas DeMasi has written in a recent book -- self-published by several Ground Zero workers -- that he escorted federal agents on an all-terrain vehicle in October 2001 and helped them locate three of the four.

His account is supported by a volunteer, Mike Bellone, whose efforts at Ground Zero have been chronicled in the New York Times and elsewhere. Bellone said assisted DeMasi and the agents and that saw a device that resembling a “black box” in the back of the firefighter’s ATV.

Federal aviation officials - blaming the massive devastation - have said the World Trade Center attacks seem to be the only major jetliner crashes in which the critical devices were never located.

A footnote to the 9/11 Commission Report issued this summer flatly states: “The CVRs and FDRs from American 11 and United 175” - the two planes that hit the Trade Center - “were not found.”

The long awaited release from Pilots For 9/11 Truth analyzing the events which took place in New York City on the morning of the 11th of September 2001. Analysis includes Black Box Recovery, Radar and Speed data analysis, Aircraft Control, and "Hijacker" Pilot Skill. Interviews with 757/767 Captains from United and American Airlines.

Visit their homepage at "Pilots for 9/11 Truth"


The cockpit voice recorder uses two microphones to capture the sounds of the cockpit for the last 30 minutes of a doomed flight on a tape loop. In the case of the hijacked 9/11 jetliners, the devices should have captured any conversations or actions involving the hijackers, as well as radio transmissions.

The flight data recorder records things like airspeed, heading, and altitude. Both devices - located in the tail of the airplane - emit loud “pings” so they can be located even in ocean jetliner crashes, like the 1996 explosion of TWA Flight 800 off Long Island.


They are built to survive an impact of enormous force - 3400 Gs - and a fire of 1100 degrees Celsius for one hour, somewhat higher than official estimates of the World Trade Center blaze.

The NTSB and FBI were able to find the black box recorders from TWA Flight 800, that exploded under mysterious circumstances at around 13,000 feet and sank to the ocean floor, where it spread out over around 25 square miles.

They also recovered and were able to identify all 230 passengers on board, but to this day, these same agencies can't find enough remains from the WTC FALSE FLAG/INSIDE JOB to identify over 1,000 missing victims, some remains so small that they can fit in a test tube or the black box cockpit recorders?

The aircraft impacts and fires in all probability would not have destroyed a single body beyond positive identification. Nor have building collapses ever been known to destroy human remains beyond recognition. However, the buildings were destroyed in a manner that converted most of their non-metallic contents to homogeneous dust, including the bodies.

Your search - WTC Flight 11 and Flight 175 black box cockpit recorders - did not match any documents.

Does ones have to be a professional LIAR to be hired by the FBI or NTSB?

The NTSB claims to have recovered cockpit voice recorders and flight data recorders from the Pentagon and Pennsylvania FALSE FLAG/INSIDE JOB attacks, but they still calim they haven't found the ones from the WTC?

"There are no related items for this investigation."

Our government would never lie to us, would they? Just because they lied about the 9/11 attacks; lied about Iraq's WMD's; lied about how long we were going to occupy Afghanistan doesn't mean they'd lie about the black box recorders, does it?
Posted by Greg Bacon at 5:15 AM