FLASHBACK: What I Learned at a Brooklyn Yeshiva? Hate and Blood Lust

While tidying up my Blogger account, I found this bit of truth, "What I Learned at a Brooklyn Yeshiva? Hate and Blood Lust" that must of got someone very pissed off, since they said they were reporting it to Blogger so they could 'wipe it off the face of the Earth.'

Even more interesting are the comments from someone calling himself 'Jeffery,' but don't bother to click on his name, since this TOUGH GUY is hiding like most bully's do when confronted with the TRUTH.

Over the years on my blog, I've been accused of bestiality, which my dog, 'Charlie Brown' said don't even try that unless you want your nuts bit off.

I've also been accused of incest with my Mother, a neat trick, since she died of ovarian cancer back in 1979.

I've also received death threats against my life with one 'bad-ass' going so far as to claim he was sending over a MOSSAD hit team to 'take me out.'

But the strangest part is that not once, not once at all did they reply and say, " I disagree with what you wrote and I'm going to use facts and data to prove you wrong."

If they had laid out a well-reasoned argument that proved the blog to be in error, I would've apologized, but all they seem capable of doing is using threats and bullying tactics to try and scare me into submission.

LMAO, as I don't scare easily, especially when it's punks who get their jollies by shooting Palestinians kids in the head or their pregnant mothers in the stomach.

So you tough guys, go ahead and send that MOSSAD hit team to waste me and if they arrive, we'll have all sorts of fun!!!

What I Learned at a Brooklyn Yeshiva? Hate and Blood Lust

I am a former Yeshiva student. I am a Jew. I grew up from the Kensington and Borough Park sections of Brooklyn, NY. My grandfather was an orthodox Jew and he was a violent hater of non-Jews ("goyim" ) and black people ("schwartze").

What exactly did I learn while attending Yeshiva all those years ago ? What exactly did they teach me there? Basically they taught me to venerate mass murderers who went around slaughtering the Hittites and the Canaanites, etc. They even taught me to sing songs about the mass-murder of non-Jews. "Hika Shaul bi arafav vi David vi rivi-votav." "Saul killed in the many hundreds and David killed in the many thousands" (pardon me if my translation is off. It's been many years and I am reciting all of this purely from memory).

Would you buy a used car from this man? 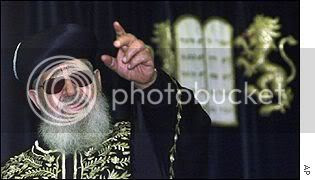 Leading Israeli rabbi Ovadia Yosef (Shas party) called for the annihilation of Arabs in April 2001, not long before 9/11. "It is forbidden to be merciful to them. You must send missiles to them and annihilate them. They are evil and damnable," he was quoted as saying in a sermon delivered on Monday to mark the Jewish festival of Passover.

The Jews who set up shop in Palestine ... those violently clannish people who call themselves "Israelis" ... they are basically spiritual and genetic descendants of mass murderers who in ancient times were known as "Israelites."

Love for the Jews ("ahavat Yisroel") and the hell with everyone else ... this is basically what I learned while attending Yeshiva many years ago.

Jews against the world ...

Jews against the rest of humanity ...

They will pigeonhole you as a "hater" if you dare to criticize the Jews ...

People will come along and they will even compare you to the likes of Hitler and Pol Pot (!!) if you dare to express horror at the behavior of the Israelites.

The Jews are good and decent people for the most part but their leaders are well-placed and they are extremely bloodthirsty.

This is my humble and my honest opinion.

I am speaking as a Jew who once attended the Brighton Yeshiva on Neptune avenue in the Sheepshead Bay section of Brooklyn, New York.

The IOF's Top Military Rabbi, Brigadier General Avichai Rontzki and his messages to soldiers during the 22-day military offensive in the Gaza Strip. The primary concern was a booklet which, among other things, contained a rabbinical edict against showing mercy.

The booklet contains quotes which declares that showing mercy during the battle would be “terribly immoral” and quotes a medieval sage who cautioned Jews not to “be enticed by the folly of the Gentiles who have mercy for the cruel.”


Brainwashing someone is most effectively accomplished during childhood. To take the young mind and program it with hate for others, like us "goyim" is guaranteed to stay with that person for the rest of their life.

Some, like the brave writer of the above, can break free and see the world without looking at other people with a jaundiced eye.

Others, like the current crop of neoCON and Zionist war mongers stalking the halls of the Pentagon and White House, not only survive on hatred of others, they thrive on their ability to poison the minds of others, bringing untold numbers into their cult of hate.

With the easily fooled and gullible OBOMBA surrounding himself with these brainwashed haters of man and the vain and conceited HRM Hillary having these Zionist automatons on her staff, whispering sweet nothings into her delusional ears, is a recipe for disaster on a planet wide scale.

They've managed to destroy Afghanistan, Palestine, Iraq and now have their sights firmly set on launching another illegal war of aggression, fought by American kids, for Israel, against Iran.... and Somalia.

Will we Americans awaken from our slumber and take back our government from these homicidal maniacs or will we fiddle like Nero, while the rest of the world burns?

Former Israeli Minister: It's A Trick We Always Use It. Calling people Anti Semitic