Is There Still Time Left to Save What's Left of our 3rd World Nation?

And that's what much of America's infrastructure is beginning to look like, a 3rd world nation that is falling apart before our very eyes, eyes that have been distracted by the Zionist Terror Masters that are gang-raping this nation to pursue their dream of an Israel that will lord over all nations on Earth.

"Structurally deficient" means that the condition of the bridge includes a significant defect, which often means that speed or weight limits must be put on the bridge to ensure safety; a structural evaluation of 4 or lower qualifies a bridge as "structurally deficient". The designation can also apply if the approaches flood regularly. "Functionally obsolete" means that the design of a bridge is not suitable for its current use, such as lack of safety shoulders or the inability to handle current traffic volume, speed, size, or weight.

American Infrastructure Crumbling because of War?

US Taxpayers are picking up the $800 Million Dollar Bill per day for War and the cost of Israel.
All the time the Infrastructure of America is Crumbling Around Them.


To put this into perspective, several years ago, I drove about a 25 mile stretch of Highway 14, the main East-West bound road thru Douglas County. As this is the Ozarks, where there are plenty of spring-fed streams, there are numerous bridges in this county.

I picked four bridges at random to check them out and not only viewed them from the topside, but parked on the side of the road to view the bridges from underneath.

Picture of one of the bridges

Picture of another Douglas County bridge 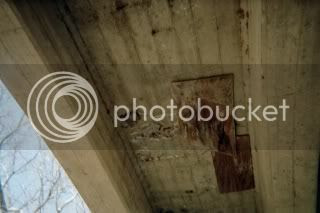 What I saw belonged in some horror movie. There was countless chunks of concrete missing from the bridges bottoms, exposing steel re-bar that was turning into rust.

Huge cracks were also in every bridge.

To make matters worse, at one time, all Missouri bridges had signs posted on both signs rating them at 15 or 20 tons or so, truck drivers carrying more weight than that crossing the bridges were subject to arrest.

The trucking industry bribed, uhh, I meant to say 'lobbied' our state legislators to remove the tonnage ratings signs, so now dump trucks carrying 40 tons of gravel or lumber trucks carrying 30 tons of logs regularly use these worn-out, obsolete bridges.

The U.S. highway system is broken. And it’s not clear where the money is going to come from to fix it.

Amid a steady rise in congestion and ongoing deterioration of decades-old roads and bridges, federal and state funding is failing to keep up with the need to maintain existing infrastructure and increase capacity. And the cash shortfall is only going to get worse, with the Federal Highway Trust Fund —supported by a tax on gasoline — projected to run dry in 2009.

Part of the problem stems from the increase in traffic borne by a national highway system that is 50 years old in places. In 1955, the system carried 65 million cars and trucks. Today, that number has nearly quadrupled to 246 million, according to the American Association of State Highway and Transportation Officials.

As recently as 2000, the highway trust fund had a balance of nearly $23 billion. By last year, that had shrunk to $6 billion. By 2009, the Congressional Budget Office estimates the fund will come up short by $1.7 billion, and the deficit will rise to $8.1 billion by 2010.

We need to make a choice and make it now. We can continue living in fear, always pissing in our pants anytime the Zionist MSM conjures up another 'al CIA Duh' boogieman story so we'll keep the Pentagon budget bloated so it can send in the 82nd Airborne to protect a dictator who was give carte blanche to rape his country's resources, as long as those huge cash payments keep pouring in to his Cayman Islands secret banking accounts and continue driving into oblivion, or we can take our nation back, stop this madness and start rebuilding this nation before it's too late.

Labels: Take Back Our Country