One of my More Interesting Experiences with Those "Christian" Evangelicals

After I was honorably discharged from the US Army back in 1972, I found myself still looking for something to soothe the burning, unanswered questions in my troubled soul and confused mind.

Hell, let's be frank; Back then, I had my head stuck so far up my ass I didn't know if it was day or night.

Those days, my best friend was a feller named George S. and we ran around, drinking booze, smoking pot, chasing the girls, in short, having a helluva lot of fun.

The next Spring, we had a grandiose scheme that involved planting several hundred marijuana plants that we thought would bring us Big Bucks at harvest time and then we'd fly to Jamaica, to spend the Winter.

We lovingly planted those little beauties all over the county, but 1973 turned out to be a year of massive rains and floods that all but wiped out our efforts, leaving only about a dozen plants near George's home and a few at my farm.

Not long after the floods had receded, George stopped dropping by or calling on the telephone. Concerned that he might of been hurt or was in some kind of legal trouble, I drove to his home to check on my best friend.

He hadn't been injured, at least not physically or wasn't in trouble with the law, but the George I saw that day, I didn't recognize. When he answered the door, he was holding a copy of the Bible in his hand and then proceeded to tell me how he had been 'saved' and turned away from his evil ways. (Why is all the fun stuff declared to be evil? They say God is the Father and wouldn't a truly loving Father want his offsprng to enjoy life?)

He invited me to join him at the next church service to be held at the local Assembly of God church, which at that time, I had no idea it was one of those Evangelical/Pentecostal types of churches.
George persisted and I finally gave in to his pleas, attending a service. And a few more. But there was some weird stuff going on during the service, with people talking in 'tongues' and falling to the floor, wriggling around like they were having a seizure, the same type of activity you might see in one who's taken too much LSD.

That church's flock was some of the poorest people in the county, yet they had managed to pay cash for the old Methodist Church and were donating around $2,500 bucks per week.Hell, even today, that kind of money is a good chunk of change, but back in 1973, it was a small fortune.

Yet I never read about where that money was going nor heard the preacher saying what good works that cash was performing. And since church members did all the upkeep and maintenance to the building, there was basically no overhead, so where the money was going question wouldn't leave my mind.

While in town one day, I dropped in to the church and went to the preacher's office, and asked him what that money was being used for. Must of touched a nerve, since his face turned red, and he stretched out his arm and pointed his finger at me and almost shouted, "It's not up to you to question what God does with his money."

I turned around, walked out of that church and haven't been back since to any church.

A few weeks later, George stopped by and informed me that since I was going to stay a heathen, he could no longer be my friend and BTW, he had destroyed those pot plants on his farm, since they were instruments of Satan.

Later that Fall, some friends dropped by saying they had some tasty buds and wanted me to try it out and see what I thought of the quality.

I smoked some and it was pretty good. Asked them where they got it from and they said it had been bought from George S. Yes, that same George that had disowned me as a friend for being some kind of infidel and had stated that he had destroyed those marijuana plants since the were from the Devil.

If George truly believed in the Bible and followed the scripture, he'd would have read that God was the Creator of all things on Earth. And since these Bible Thumper types claim God is the essence of purity and not evil, then how can the marijuana plants, that give happiness to some and relieve horrible pain in others, be evil.

Because if they are evil, then doesn't that mean George's God is evil? 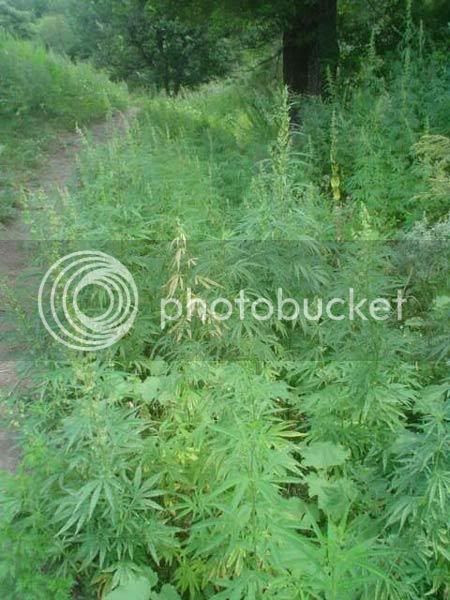 I know me peepers aren't what they used to be, but in the above pic, all I see is beauty, not evil.

Oops, almost forgot. Yesterday was proclaimed by another religious cult like bozo that would be the day the world ended.

Anyone besides me still out there?:)

Labels: Opium for the MASSES