A pic of smiling, happy kids looking forward to a fun night of 'Trick or Treating.'

See any evil in these angelic faces? 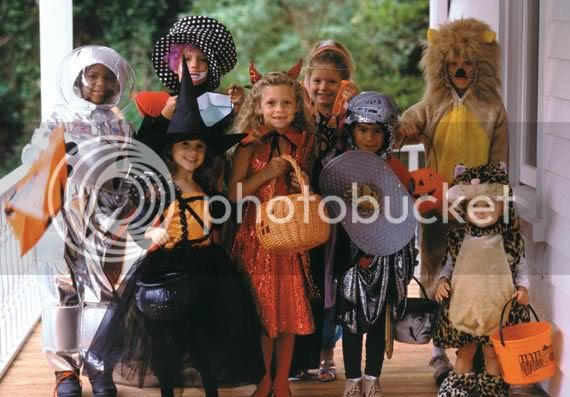 A Christian View of Halloween

More lunacy from those who seek to stamp out any fun children might have when they go 'Trick or Treating.'

Halloween has always been my favorite holiday. Starting around October 1, I would start dressing up my home and yard with various Halloween type figures, not as a show of evil, but because I knew that the kids that would show up on Halloween, asking for treats, would be smiling and laughing at the funny figures I had in my yard and that would let them know that a large portion of candy would be awaiting them.

More insanity from those 'loving' Evangelicals denouncing all the fun kids get on Halloween.

The Dark Side of Halloween

And these are some of the same 'Christians' that are cheering on the endless bloodbaths against Muslims in the ME; SW Asia and Africa?

So which is the real evil? Kids having fun 'tricking' you into giving them candy on Halloween or deranged 'Christians' ignoring that Commandment that says "Thou Shalt Not Kill?"

For a rational, intelligent view of Halloween, this is a good article.

Who are the real 'demons' on Halloween?

Passages from the Hebrew Scriptures (a.k.a. Old Testament)

Leviticus 17:7-9: "And they shall no more offer their sacrifices unto devils...Whatsoever man...that offereth a burnt offering or sacrifice, And bringeth it not unto the door of the tabernacle of the congregation, to offer it unto the LORD; even that man shall be cut off from among his people." This rule also applied to foreigner visitors in their land; they were allowed no religious freedom.

Numbers 1:51: "...when the tabernacle is to be pitched, the Levites shall set it up: and the stranger that cometh nigh shall be put to death." A non-Israelite who comes too close to the Jewish temple is to be executed.

Numbers 3:10: "...they shall wait on their priest's office, and the stranger that cometh nigh shall be put to death." As above.

Numbers 17:13: "...whosoever cometh any think near onto the tabernacle of the Lord shall die." As above.

Deuteronomy 17:2-5: "If there be found among you...[a] man or woman...[who] hath gone and served other gods and worshipped them...then shalt though bring forth that man or that woman...and shalt stone them with stones, till they die." This is a statement of total religious intolerance, calling on the death penalty for holding different religious beliefs.

Psalms 106:35-38: "But were mingled among the heathen, and learned their works. And they served their idols: which were a snare unto them. Yea, they sacrificed their sons and their daughters unto devils..." Gods and Goddesses of other societies were regarded as devils.