Want to live the good life, riding around in chauffeured limos, living in luxurious mansions and having your own private jet?

Then grab hold of some American taxpayer money by becoming a war profiteer. Never mind that irksome thing called conscience, who needs some nerdy voice in your head saying this is wrong?

When you go for the Big Bucks, anything goes.

There's so many examples of this murderous, VERY lucrative activity, you could write a book, so I'll have to keep this brief.

Want a quick death with a bullet, or a long, drawn out painful episode because your government fed you and your buddies poisoned beef?

The United States Army beef scandal was a political scandal caused by the widespread issuance of extremely low-quality, heavily adulterated beef products to US soldiers fighting in the Spanish-American War.

As a result, most of the meat arriving in Cuba was found to be so poorly preserved, chemically adulterated and/or spoiled that it was toxic and dangerous to consume. The meat caused an unrecorded number of illnesses and death from dysentery and food poisoning, having an especially deadly effect on the thousands already weakened by the epidemics of malaria and yellow fever which were ravaging the unprotected American troops and would eventually kill twice as many men as the bullets of the Spanish.

"[M]uch of the beef I examined arriving on the transports from the United States ... [was] apparently preserved by injected chemicals to aid deficient refrigeration", the medical officer wrote. "It looked well, but had an odor similar to that of a dead human body after being injected with formaldehyde, and it tasted when first cooked like decomposed boric acid ..."
"The meat ... soon became putrid", wrote one colonel, "and in many of the cans was found in course of putrefaction when opened".

Nelson Miles, then commandeering general of the ArmyYummy, makes me want to rush off to McDonald's and grab some of this tasty shit!!

World War I, the war fought to set the stage for the eventual invasion of Palestine by the Khazar Tribe, made the Money Changers rich beyond imagination, never mind the millions killed, the millions more wounded and the devastation of Europe.

Major General Smedley Butler, USMC, criticized war profiteering of U.S companies during World War I in "War Is a Racket." He wrote about how some companies and corporations increase their earnings and profits by up to 1700% and how many companies willingly sold equipment and supplies to the U.S that had no relevant use in the war effort. In the book, Butler stated that "It has been estimated by statisticians and economists and researchers that the war cost your Uncle Sam $52,000,000,000. Of this sum, $39,000,000,000 was expended in the actual war period. This expenditure Yielded $16,000,000,000 in profits."

General Butler had several splendid ideas when it came to war and how to prevent future conflicts:

Making war unprofitable Butler suggests that the owners of capital should be "conscripted" before soldiers are: "It can be smashed effectively only by taking the profit out of war. The only way to smash this racket is to conscript capital and industry and labour before the nation's manhood can be conscripted.…Let the officers and the directors and the high-powered executives of our armament factories and our steel companies and our munitions makers and our ship-builders and our airplane builders and the manufacturers of all other things that provide profit in war time as well as the bankers and the speculators, be conscripted — to get $30 a month, the same wage as the lads in the trenches get."

How many wars do you think would never have happened if the good general's advice had been put into law and enforced?

Ohh, there would be so many sad faces of the board members of the MIC if they knew they would be the first to go 'Over There' if an actual war broke out, whether by invasion of by setting off false flags.

Or sending members of Congress into combat to 'fight for democracy,' how many do you think would be eager to sign up to get shot at?

Think Senator Diane Fenstein would vote 'Aye' on all these war resolutions and opt to go over to some ME or SW Asia nation and fight or would she rather live in her $16.5 million dollar San Francisco mansion, purchased with profits made by killing people?

Fenistein's home in the trendy, upscale Pacific Heights neighborhood. The four-story abode, which has sat empty for the past couple of years, has five bedrooms (including two master suites), three fireplaces, an elevator, a wine cellar and an in-law apartment. 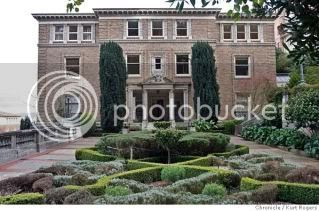 How can anyone live in such squalor?

The Center for Public Integrity has reported that US Senator Dianne Feinstein and her husband, Richard Blum, are making millions of dollars from Iraq and Afghanistan contracts through his company, Perini. Feinstein voted for the resolution giving President George W. Bush the authority to invade Iraq.

Those poor dears, how do they get by? Why, they must be on a starvation diet!

This is hardly Blum and Feinstein's only real estate undertaking in recent years. Five years ago, they traded in their five-story townhouse in Washington, D.C., for a nearly $6 million, French Renaissance-style estate in the Spring Valley neighborhood, just down the street from American University.

A couple of years earlier, they built themselves a $7.4 million ski retreat on 30 acres in Aspen, Colorado.

Why would an American Senator, who has sworn an oath to defend this country from all enemies, both external and internal, turn against her nation and become some lackey for a foreign power? 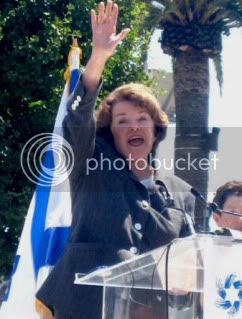 But a Big Con Job ALWAYS needs the Big Lie, or in this case, lies, around 1,000 ought to do the trick and keep that cash rolling in to those offshore bank accounts.

President George W. Bush and seven of his administration's top officials, including Vice President Dick Cheney, National Security Adviser Condoleezza Rice, and Defense Secretary Donald Rumsfeld, made at least 935 false statements in the two years following September 11, 2001 about the national security threat posed by Saddam Hussein's Iraq. Nearly five years after the U.S. invasion of Iraq, an exhaustive examination of the record shows that the statements were part of an orchestrated campaign that effectively galvanized public opinion and, in the process, led the nation to war under decidedly false pretenses...stated unequivocally that Iraq had weapons of mass destruction (or was trying to produce or obtain them), links to Al Qaeda, or both.

And no listing of these blood soaked vampires would be complete without mentioning the world's BIGGEST DICK, former VP Cheney:

The first name that comes to everyone’s mind here is Halliburton. According to MSN Money, Halliburton’s KBR, Inc. division bilked government agencies to the tune of $17.2 billion in Iraq war-related revenue from 2003-2006 alone. This is just the latest in a long string of military/KBR wartime partnerships, thanks in no small part to Dick Cheney’s former role with the parent company.

Halliburton lies about 'Iraq for Sale: The War Profiteers'


Comment left on this video's web page. Pretty much says it all:

If you're not outraged, you're not paying attention. Our government shits on the constitution and we the people. I'm thankful my﻿ father is in the oblivion of Alzheimer's...the disgrace of what he and his 6 brothers fought for would be too much to bear. Nation of sheep, run by wolves, owned by pigs. Shame on the sheep for whose inaction allows and condones this.

We rank the largest contractors in the government market based on an analysis of government procurement data during fiscal 2010.

I know this might be hard to believe, but of the top ten companies on this list, NINE are war mongering profiteers.

There's so much looting of taxpayer money that Congress formed the Commission on Wartime Contracting to sic some vicious bloodhounds on the trail of these thieves and guess who's on that committee?

Rabbi Dov Zakheim. Yes, the same 'Chosen One' who was the Department of Defense's Comptroller when over 2.3 TRILLION DOLLARS went 'missing.'

Whew, I feel so much better now that the good Rabbi is on the scene of the crimes, I'm sure he'll uproot the corruption!!!

After a three-year investigation, a Congressionally mandated commission yesterday issued a blunt finding, that between $31 billion and $60 billion has been misspent on the two wars.

And yes, Dov is actually a Rabbi, a CFR member and a co- author of the Project for the New American Century's position paper, Rebuilding America's Defenses, advocating the necessity for a Pearl-Harbor-like incident to mobilize the country into war with its enemies, mostly Middle Eastern Muslim nations.