"You're just a Bunch of Mean, Jew hating anti-Semites!" 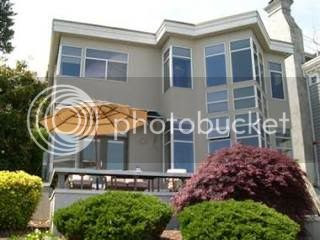 A Seattle chiropractor and his wife live in a $1.2 million waterfront home and have spent the past eight years flying to Moscow, Paris, Israel, Turkey, Mexico and the Dominican Republic.

All the while, federal authorities say, the couple was collecting more than $100,000 in welfare.

In gaining Section 8 housing assistance, Shimonova represented that she lived alone with her two children and that her household assets were less than $5,000. Silverstein received the monthly benefits of $1,272 as Shimonova's purported landlord, the government said.
A federal welfare fraud investigator, wrote in an application to search the couple's home that they took weeklong trips to Moscow in 2003, Dominican Republic in 2005, and Mexico and France in 2009. In 2007, they went for 12 days to Israel, and this past June they took a two-week trip to Turkey.

Furthermore, it appeared clear that the pair was actually married. Silverstein wrote on the website of his chiropractic business: "On a personal note, I am happily married with two children, whose careers are in medicine and Middle Eastern studies. As a family, we all enjoy snow-shoeing, mountain climbing and ocean sports."

A report of the Jewish Federation of Greater Seattle for the 2010 fiscal year listed "Mila and Dr. David Silverstein" as donors.

It's apparent the Seattle PD is filled with Jew hating anti-Semites.

What other reason could there be for them to trump up some bogus charges and arrest this kindly couple, who like to visit the greatest nation on Earth and donate money to Jewish causes?

It's been like this for several millennia. We poor, down trodden Jews, barely getting by, have always been been getting picked on and even kicked out of at least 109 nations over the centuries by you GOYIM, just because you like picking on us kindly, gentle, peace-loving 'Chosen Ones.'

If this had been a Muslim couple, they'd been arrested by DHS Gestapo agents and tossed into some dungeon, held without bail, accused of flying overseas to aid 'al CIA Duh.'

If it's not the Zionist owned, Jewish run Federal Reserve mobbing up with the Zionist owned, Jewish run "Too Big to JAIL" Wall Street gangster outfits stealing trillions from our 401K plans and pension accounts, it's the world's 2nd biggest money-making scam always pouring shekels into the Jews pockets, the never-ending scam of extorting money from nations by using the Holocaust™ word.

16,000 Holocaust victims to get German pensions

After a year of tough negotiations, Germany has agreed to pay pensions to about 16,000 additional Holocaust victims worldwide — mostly survivors who were once starving children in Nazi ghettos, or were forced to live in hiding for fear of death.

The agreement announced Monday between the New York-based Claims Conference and the German government is "not about money — it's about Germany's acknowledgment of these people's suffering," said Greg Schneider, the conference's executive vice president.

Otto Herman, 81, and his sister Erzsebet Benedek, 78, were forced into the Budapest ghetto starting in October 1944, when he was 14 and she was 11. They were freed when the Russian army arrived in January 1945, but they lost most of their family during the war.

The siblings, who now live in neighboring apartments in Brooklyn's Williamsburg area, said the pensions would help them financially. But though "it will help a lot," Herman said, the money cannot compensate for the harrowing wartime experiences.

"It is not enough," Herman told the AP by telephone, speaking in a thick accent. "I will never forget ... Sometimes I don't want to speak because of the memory."

To reach the new accord, Schneider traveled to Berlin each month. "It was not easy to negotiate this — it took a year of hard-fought negotiations with the Germans, with many meetings and lots of documentation."

Blah, blah, blah. If the Nazis were so mean and nasty towards the Jews, then how come Jews from around the world helped finance Hitler's rise to power and during WWII, used their many banks to get Hitler the money and raw material needed to keep fighting?

Why did over 150,000 German Jews serve in Germany's armed forces during WWII?

"I will never forget ... Sometimes I don't want to speak because of the memory."

Any well trained psychiatrist will tell you that the best way to rid your mind of a terrible experience is to talk about it, flushing out the memory so that eventually, it's only a dusty footnote in some remote part of your brain.

If Herr Hermann doesn't want to talk about those memories, he's either a masochist or those 'memories' never happened.

And if Mr. Hermann has the assets available to fly Berlin each month for the past year, he must be a man of some wealth. Wealth that was probably stolen from the German people who have been paying off these Holocaust™ scams for decades, along with other nations and companies these well trained thieves have been able to ransack.

Will we never hear the end of these con jobs, or will the self-perpetuate into the 22nd Century?

Children of survivors plan to file class action against German government, demanding that it recognize traumas caused by childhood in shadow of Holocaust.

Many of the second-generation survivors told Fisher about the difficulties they were forced to experience as children to Holocaust survivors, difficulties which affect their lives to this day, and due to which they are in need of ongoing mental treatment.

This brought upon the initiative to form a class action against the German government, demanding that it bear the costs of the psychological and psychiatric treatment many of the survivors' children are forced to undergo due to their childhood in the shadow of the Holocaust.

Jesus H. Christ, what's next, the grandkids also filing lawsuits against Germans, seeking to extort an endless river of money into their pockets?

Holocaust survivors in the US will ... “Many of these survivors have pressing medical and housing needs and this bill seeks to ...

What the Fuck? This bill seeks to do what, steal what little money the Zionist owned, Jewish run Fed and Wall Street gangsters didn't steal from Americans since at least 1914?

Where's the escape hatch, I want out?

Want to find out how the Zionist Jews have totally brainwashed Americans about their money making racket, the Holocaust™ ?

Pick any 10 people on the street and ask them how many died or were killed during WWII. (When I searched on Google for the number, I only typed in 'number killed during WWII' and out of the 10 links on the initial page, four of them dealt only with the number of Jews killed)

Most, or maybe even all won't know that at least 60 million died, mostly civilians, thanks to the Allied Air Forces carpet-bombing cities.

Ask that same 10 how many Jews died during WWII and before you finish the question, they'll repeat in a robot like voice that "during WWII, the Nazis systematically exteerminated six million Jews...."

That shows that owning the media, like the Zionist Jews do, can make people believe all sorts of nonsense.