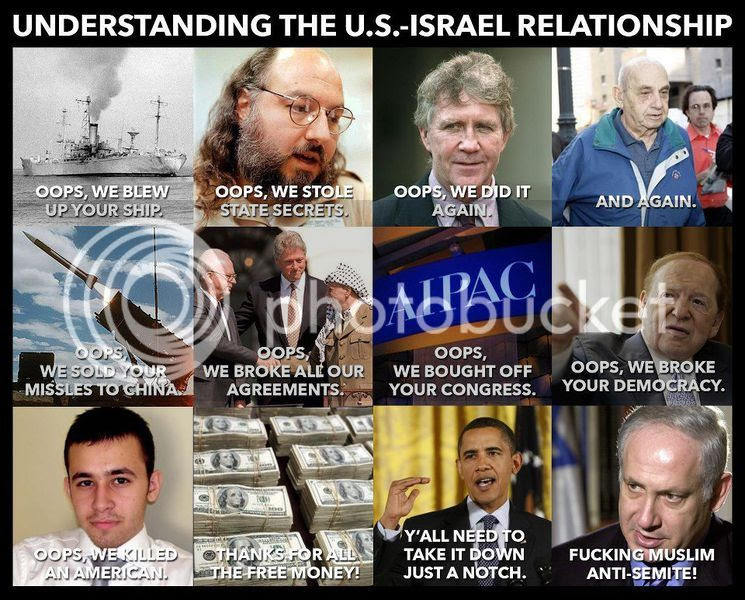 Our special relationship ally savagely attacks one of our ships, the USS Liberty and US traitors help cover up the slaughter.

A back-stabbing American Jew Israeli spy helped give our nuclear weapon secrets to the USSR.

Another back-stabbing American Jew gets caught spying for Israel

And yet another back-stabbing American Jew, spying for Israel, gets caught, but only gets fined, the poor dear. Damn the anti-Semites that thought he should of went to jail!

Israel sells US missile technology to Commie China and is rewarded by Congressional traitors.

Israel has a long and sordid history of re-engineering weapons given to it by 'Uncle Sucker,' slapping a Yid sounding name on the weapon and selling it to other nations.

Israel broke the Oslo Accords, which the Zionist MSM then blamed on Arafat.

What happens when you mention the dreaded 'P' word to a typical Israeli.


'US Congress controlled by AIPAC'


This American Jew traitor made his most of his loot in the USA, then gives large chunks of the money to Israel, all tax free donations, which means hard-working Americans pick up the difference at tax time.

Israeli Goon Squads illegally board an aid ship to Gaza and savagely murder at least nine unarmed humans in cold blood, including an American and Congress stays mum.

More Israeli Crimes Against Humanity. Who will stop this psychotic State of Hate before the use their SAMSON option and nuke the entire planet?

Israel's non-lobby lobby, AIPAC, to host terrorist thugs, including their buddies in 'al CIA Duh' at DC love fest on Sunday, May 12.

Good luck finding out anything about this 'Talmud Terrorist' summit.