"Why are 9/11 Truthers Labeled as anti-Semitic?" 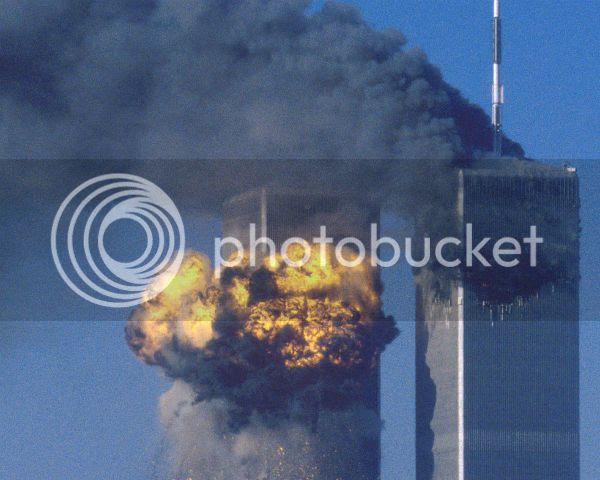 You can look at what happened on 9/11 in four different ways:

1. You can click your heels together and salute the flag anytime you hear any of the hundreds, if not thousands of lies told by the corrupt DC and MSM parasites about 9/11. If that is you, you are completely lost and beyond redemption by now if you haven't begun to ask questions about the biggest con of the 21st Century.

2. Maybe you think the Bush-Cheney Junta knew what 'Shlomo' Bin Laden was up to and did nothing to protect the USA on 9/11. If that is you, you can still salvage your mind and cleanse your soul by coming over to the TRUTH about 9/11.

3. Perhaps you believe that the Bush-Cheney Junta not only knew BL and his buds were going to attack on 9/11, they used the FBI to help and assist the crew in their mission. Good deal, because you are far along a path that is leading to truth and enlightenment that will free you from the Zionist matrix that is destroying humanity.

4. Or maybe you've done your homework over the years, refusing to believe the toxic lies spewed by the Jew owned MSM about 9/11 and know for a fact that 9/11 was a False Flag, designed and executed by Israel with help from the White House and corrupt elements of the FBI, the CIA and NSA and the Pentagon. If that is you, congratulations, you can still think for yourself and know you must keep pushing for 9/11 Truth, no matter what the lying weasels in the WH or the Jew owned MSM fart out.

So why do 9/11 Truthers, whether in the USA or Sweden, get fingered as being anti-Semitic? Because Israel and her Zionist Jew lackey's around the world know that they must keep the fictions of 9/11 alive and well, for when the truth comes out about 9/11, that it was masterminded by Israel, that nation of parasitic land thieves, murderers, corruptors, kidnappers, false flag experts and back-stabbers will get 'wiped off the face of the Earth.'

A TV-program from 2010 (hit-piece) made by Swedish TV4 about The 9/11 Truth movement in Sweden and also in other parts of the world. TV4:s approach and agenda was to demonize all 911-truthers and forcing a slander upon all intrested in 911 by portraying them in this tv-program as "anti-semitic" and "a threat to democracy". People watching this program will instantly recognize this unethical approach towards investegating a very serious issue like 9-11. Google "English FAQ Vaken.se" for more information on this and info on the Swedish 9/11 Truth movement.


Why one of the groups that recently won a Grammy has been dropped by the blathering idiots on the Jew MSM.
One is a 9/11 truther.


There Are No Anti-Semites in the 9/11 Truth Movement


Keep it up! I am proud to be an anti-Semite! I wasn’t raised to be; but I became one; because of people like you! I noticed that the Jews in the media called everyone who was against the Federal Reserve an anti-Semite. I also noticed that the Jews in the media also said that anyone that points out the fact that Jews monopolize the media, were also an anti-Semites. So I did my own research and found out that Jews do run the media and the Federal Reserve is basically a worldwide Jewish Mafia. They use their media control to cover up the fact that America is controlled by Jewish Mafia. That made me an anti-Semite.

I guess I just don’t like liars. I know that according to the Jewish religion that it is not a sin for Jews to lie to non Jews; and that explains a lot about the lies in our media and government. So until the good Jews start calling out the bad Jews; anti-Semitism will grow. And really it needs to grow for America to be saved. So there are good Jews like Ed Asner, but they seem to be far outnumbered buy the corrupt Jews, like the ones that run CNN and have Dr. Drew (Dr. Jew) up there being paid off by drug companies to push drugs on everyone. Kind of like your show is titled the “Skeptics guide” but all you do is defend the official lies. Kind of like Bill Mars show is called “Politically Incorrect” but all he does is present the Politically correct point of view. Anyway so I guess my point is keep calling everyone Anti-Semites! It helps us!! Thanks, keep up the good work!! People will eventually be able to see what you are doing.

P.S. Even the term anti-Semite is a Jewish lie. Judaism is a religion not a race. Many Jews are from the Southern Russian Regions of Europe; they are, and never will be Semites. Many Semites are not Jewish; like the Palestinians. So again everything about the Jews seems to be a lie. Jews always act like they are some oppressed minority, even though they are the ruling class. Jews act like they have been so oppressed, when some of the biggest slave owners in the South were Jewish. Even the custom of changing your names, like Mike Weiner (AKA. Mike Savage) shows a pattern of lies and deceit. Always pointing the finger at the Nazis, but not at the Jewish Bolsheviks. How many movies have been made about the Bolsheviks? Zero? Gee why is that? Could it be Jewish control of Hollywood? I wonder.lol!