Does the MSM Collude with Each Other?

Let me start out by saying I am NOT a fan of Trump, who has shown his true colors after getting elected. Those colors are blue and white, the colors of the flag of 'Stolenland,' AKA Israel. (Yes, I'm aware of the pro-Israel speeches Trump made in the months leading up to the election, but did you see or hear any of them on the MSM?)

Trump is just another Israeli ass-kissing American president, who puts the wants of Israel ahead of the needs of the USA. Or a "Shabbos Goy," a Gentile that does the dirty work for Jew Inc, like Making America Israel Great Again, by going after Iran, which Israel wants wiped off the map.

Just like they wanted Iraq, Libya and Syria destroyed and got their wish in the first two. The destruction of Syria has met a Russian road block, but the nucleus of that plan is still in operation in eastern Syria. 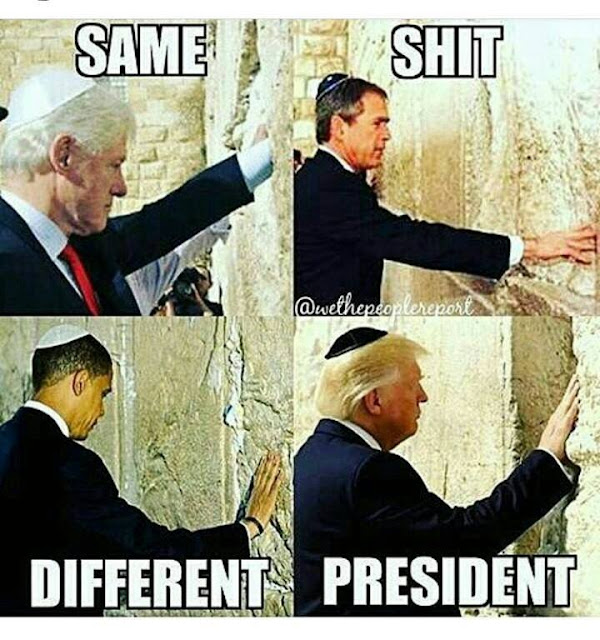 Back to the original topic, is the MSM colluding with each other against Trump?

Take a look at this pic of various news outlets blabbering about Trump after he accepted the Republican presidential nomination. 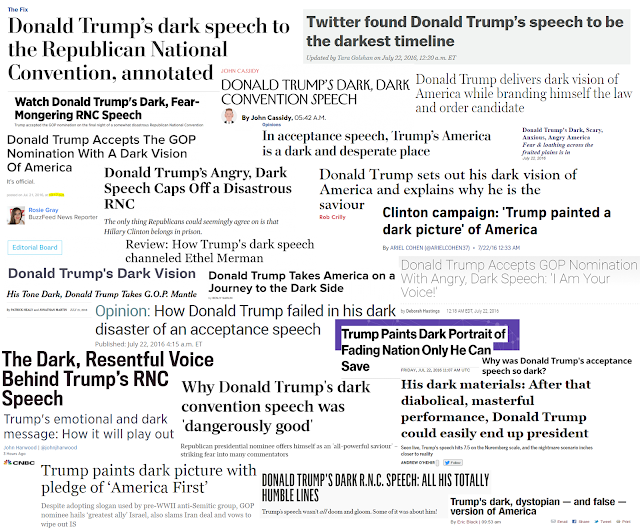 Each and every headline uses the term 'dark,'--one way or the other--to describe Trump's vision for Gulag USA.

Now either these MSM outlets all work in the same office, or someone, somewhere is guiding the American MSM so they all broadcast the same lies.

Just like they did in the days after the Israeli masterminded 9/11 False Flag; they were all lying about Bin Laden and his posse of 19 Muslims, since the 'Wars for Wall Street and Israel' needed a kickoff and that's what the neoCON and Zionist scum got with their 9/11 False Flag.

If you know who owns the vast majority of the MSM, then you'll know who has been telling us lies, more lies and damn lies for decades, which got kicked into high gear after 9/11.


Jews DO control the media By Elad Nehorai

We Jews are a funny breed. We love to brag about every Jewish actor. Sometimes we even pretend an actor is Jewish just because we like him enough that we think he deserves to be on our team. We brag about Jewish authors, Jewish politicians, Jewish directors. Every time someone mentions any movie or book or piece of art, we inevitably say something like, “Did you know that he was Jewish?” That’s just how we roll.

We’re a driven group, and not just in regards to the art world. We have, for example, AIPAC, which was essentially constructed just to drive agenda in Washington DC. And it succeeds admirably. And we brag about it. Again, it’s just what we do.

Suddenly we’re up in arms. We create huge campaigns to take these people down. We do what we can to put them out of work. We publish articles. We’ve created entire organizations that exist just to tell everyone that the Jews don’t control nothin’. No, we don’t control the media, we don’t have any more sway in DC than anyone else. No, no, no, we swear: We’re just like everybody else!

Does anyone else (who’s not a bigot) see the irony of this?

Let’s be honest with ourselves, here, fellow Jews. We do control the media. We’ve got so many dudes up in the executive offices in all the big movie production companies it’s almost obscene. Just about every movie or TV show, whether it be “Tropic Thunder” or “Curb Your Enthusiasm,” is rife with actors, directors, and writers who are Jewish. Did you know that all eight major film studios are run by Jews?

But that’s not all. We also control the ads that go on those TV shows.

And let’s not forget AIPAC, every anti-Semite’s favorite punching bag. We’re talking an organization that’s practically the equivalent of the Elders of Zion. I’ll never forget when I was involved in Israeli advocacy in college and being at one of the many AIPAC conventions. A man literally stood in front of us and told us that their whole goal was to only work with top-50 school graduate students because they would eventually be the people making changes in the government. Here I am, an idealistic little kid that goes to a bottom 50 school (ASU) who wants to do some grassroots advocacy, and these guys are literally talking about infiltrating the government. Intense.