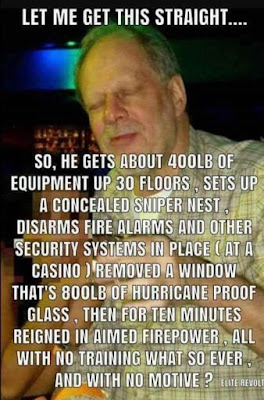 If the FBI ever asks you for help....


Kymberley Suchomel, a survivor of the Las Vegas shooting who claimed there were multiple gunmen involved in the shooting, has been found dead. She was 28.

Suchomel was not injured during the shooting at the Route 91 music festival, and died suddenly in the early hours of Monday at her Apple Valley home, according to her grandmother, Julie Norton, who explained to SeaCoast Online that Kymberley must have died at some point during the four hours she was alone in the house.

Norton found Suchomel just after 8:30 a.m. when she arrived to care for her 3-year-old great-granddaughter. Suchomel’s husband Mike had left for work earlier that morning at 4:30 a.m.

Days after the shooting, Kymberley Suchomel explained to the Victorville Daily Press  how she and her friends escaped with their lives as bullets rained down “from all angles” on the 20,000 concertgoers on Oct. 1.

Suchomel was also vocal about the fact there was “more than one gunman” involved in the attack, speaking out repeatedly and claiming that Las Vegas police and mainstream media were not providing the public with a truthful account of what happened. 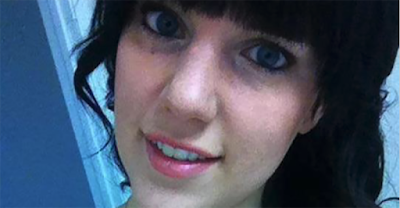 “Every single survivor I have talked to also remembers multiple shooters, and at least one from the ground- why aren’t we being taken more seriously? Tons of things don’t add up,” she wrote on Facebook. [That account has been closed. Thanks Mark Zuckerberg]

“I have been watching the news non-stop since I arrived back home to my family. And it just doesn’t make sense. The story that are feeding everyone doesn’t add up to our eyewitness accounts. There is something wrong with what they are saying & the evidence seems fake if you ask me.”

Explaining that she called her husband and grandmother to warn them she was in a shooting and might not make it out alive, Suchomel wrote, “The gunfire wasn’t stopping this whole time. It wasn’t ceasing. It wasn’t slowing down. And It was directly behind us, following us. Bullets were coming from every direction. Behind us, in front of us, to the side of us.

Kymberley Suchomel’s grandmother confirmed that she was in good health. Though she suffered from focal epilepsy, it is understood that the condition is rarely life threatening.

The news comes days after a Mandalay Bay valet, who parked Stephen Paddock’s car when he checked in, has mysteriously disappeared after giving an interview to mainstream media in which he insisted the suspected shooter was “a normal guy” and “didn’t have many bags.”

The article has now been deleted from the KITV4 News website after it appeared to go against the official narrative that “lone wolf” gunman Paddock managed to smuggle enough guns for a small army into his hotel suite completely unnoticed by staff or security personnel monitoring the hotel’s CCTV.

KITV4 have so far refused to explain why their article was suddenly scrubbed from their website, or if they were acting under outside orders.

Wonder if this is like the USS Liberty affair, the US ship that got attacked by Israel and then president LBJ refused to come to their aid while they were getting slaughtered by our ally, because he didn't want to embarrass Israel?

An ally that would attack helpless people in skyscrapers would also butcher Americans at a concert.
Posted by Greg Bacon at 9:34 AM