Why do Jews Get so Defensive About Questions on the 9/11 False Flag? 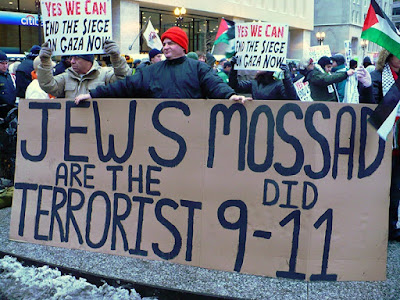 On the morning of 9/11, 4,000 American Jews and Israelis should of been working in the Twins, yet only FOUR--according to Nuttyahoo--were killed?

Christopher Bollyn, the author of a series of articles and books on “Solving 9/11,” is presently on tour promoting his latest book, The War on Terror: The Plot to Rule the Middle East. And wouldn’t you know it? With every stop he makes he seems to be infuriating local Jews in the towns and cities he visits.

Bollyn's been on this tour, getting harassed along the way by Juden, like the clown in this video. Notice that the Jew--and his wife/girlfriend--is reading off a piece of paper? Did that paper have questions the Jew scribbled on there to ask Bollyn or was it some kind of email/text from Jew Inc, sent to obedient Jews in the cities Bollyn is visiting, with info on how to disrupt or get his talks cancelled, which happened in Santa Cruz, or to ask him questions, which always focus on Jew victimhood or screeching that you're some kind of Nazi-loving anti-Semite?

Spoiler! At around the 19:28 minute mark, the Jew claims that he was shot at while--walking in the Stolen Golan--from someone several miles away! Wow, what kind of rifle is that?

When all your LIES fail, pull out the victim card, the one with the six million lies, that usually makes grown men wet their pants! Which is what happens at the end, they flaunt their narcissistic nightmares, then with a wave of their paw, walk away.


Jews, and that parasitic state of Hate they worship--and Americans support with free money and weapons--know that they must protect, at all costs, the two biggest lies of all time. The phony Holocau$t™ racket and that Israel masterminded the 9/1 False Flag.

Because if the truth about either comes to light, Israel will no longer exist. IMO, that is why these domestic terror attacks, set off by the FBI, Mossad and the CIA, are increasing in frequency and horror, to keep Americans so hobbled by fear that we cease to function as rational, thinking beings and succumb to the Zionist Terror Masters.

"...The real problem for the Jews is that you can’t argue with them. They are immune to logic, which makes their future very problematical when everybody finds out what they have done to sabotage the health and happiness of everything that lives...." John Kaminski


Watch the video above for visual proof of the above statement by Kaminski. Bollyn (and the cameraman off camera at the back of the room) try to reason with the Jewish questioner. They keep running into total absence of logic. The Questioner seems to have been brainwashed with all the buzz words and talking points of the M$M. He starts off by lecturing Bollyn with the shopworn "definition" of a conspiracy theorist..."One who starts off with a conclusion and then dismisses anything that contravenes that conclusion to end up with a (conspiracy) theory." Bollyn counters by asking the Jewish questioner "what facts have I omitted? Name just one". The questioner quickly moves away from that argument and does not present one fact.

The topic switches to the Middle East and the question of why the United States has been forced to go to war for Israeli interests. This is where it gets interesting….the offscreen cameraman keeps drilling down on the Jewish questioner’s responses….Why is Israel so disliked in the middle east that it has to “defend itself” from all its neighbours? Finally the truth is presented (by the cameraman): “Because of what has happened to the Palestinians (and by extrapolation is threatened to all Arabs living on land that Jews covet).”

The questioner, to his credit, finally answers the question of why Israel wants to destroy Syria…He asks: “Have you ever walked the Golan Heights? Have you ever stood on top and seen the land spread out before you? The Golan Heights is prime land for anyone to shoot down at Israel.” So, in other words…any land in the middle east that is within shooting distance of Israel is fair game for Jewish takeover. Is that logical?????

The brave and resolute Palestinians have been resisting the Zionist Jew occupation of their native lands for nearly eight decades. Surely we Americans can resist the Jew Occupation of our lands for at least a couple of decades to reclaim our nation from the neoCON and Zionist war mongers and terror masters?

Or do you want your city to look like Gaza? Which many American cities will start looking like, if we keep fighting these endless Wars for Apartheid Israel, since we will have NO money left over to fix our broken nation. 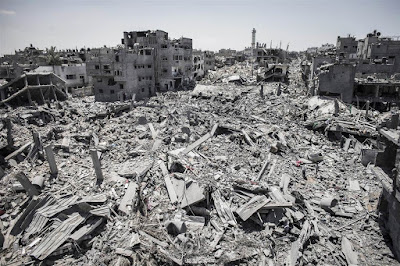