How Dare N Korea Not Want to Get Bombed!

Don't they know the USA has a Divine Edict to violently interfere in any nation that doesn't lick our asses..except Israel, whose ass we lick.


STEPHANOPOULOS: Well, and that leads to the question now, what should be done about it. Do you believe that President Trump should be speaking directly to the leader of North Korea?

GABBARD: Absolutely and immediately. This is something that I’ve been calling for for a long time. I’ve been talking about the seriousness of this threat posed to the people of Hawaii and this country, coming from North Korea. The people of Hawaii are paying the price now for decades of failed leadership in this country, of failure to directly negotiate, to prevent us from getting to this point where we’re dealing with this threat today, setting unrealistic preconditions...

Our country’s history of regime change wars has led countries like North Korea to develop and hold onto these nuclear weapons because they see it as their only deterrent against regime change. And this is what’s important for President Trump to recognize. It is critical that we end our policies of regime change wars to provide that credible guarantee that the United States is not going to go in and topple the North Korean regime so that these conversations can begin toward denuclearization.

STEPHANOPOULOS: Just to be clear, you’re saying that Kim Jong-un’s nuclear arsenal is our fault?

GABBARD: What I’m saying is that Democrat and Republican administrations for decades, going back over 20 years, failed to recognize the seriousness of this threat, failed to remove it. And we know that North Korea has these nuclear weapons because they see how the United States, in Libya for example, guaranteed Gaddafi, we’re not going to go after you; you should get rid of your nuclear weapons. He did, then we went and led an attack that toppled Gaddafi, launching Libya into chaos that we are still seeing the results of today.

North Korea sees what we did in Iraq, with Saddam Hussein, with those false reports of weapons of mass destruction. And now seeing in Iran how President Trump is decertifying a nuclear deal that prevented Iran from developing their nuclear weapons, threatening the very existence and the agreement that was made.

So yes, we’ve got to understand North Korea is holding on to these nuclear weapons because they think it is their only protection from the United States coming in and doing to them what the United States has done to so many countries throughout history.

STEPHANOPOULOS: Was it a mistake for the United States to take out Gaddafi and Hussein?

GABBARD: It was, absolutely.

STEPHANOPOULOS: Tulsi Gabbard, thanks for the time this morning.

See how quickly the scuzzy POS Stephanopoulos slithers out of the intelligent Gabbard comments the first chance he gets?


C'mon Kim, let the USA war machine give you some love! 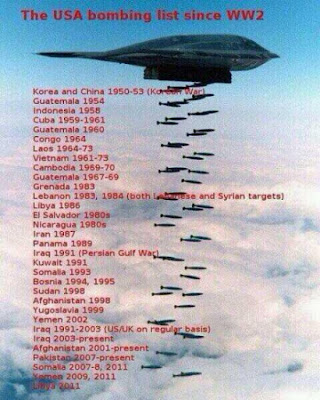 Oh oh, look out Kim, our Overlord Israel has you on their 'To Do' list!