More PROOF that the White Helmets are a FRAUD

Firefighters today do a lot more than just fight fires. Like rescuing people trapped in life-threatening condition's, such as building collapses; extricating victims from vehicle accidents on interstate highways, where the speed can turn a car or truck into a twisted mess of metal, with a living human inside. Rappelling down cliffs to rescue someone either injured and unable to move or that's frozen with fear, afraid to move up or down.
This I know from my time as a career firefighter.

It doesn't take long for your helmet to get scratches, dings and other VISIBLE damage. Unlike the one pictured sitting on the bedpost, with the WH actor appearing to cry into his hands. If he had done ANY rescue work, that helmet wouldn't look like it was brand new, which this one apparently is: 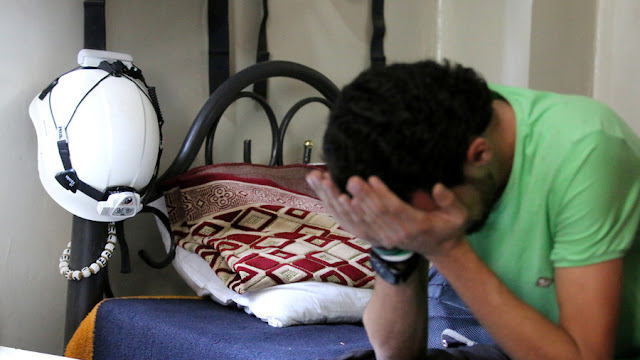 The propagandists posing this fraud should of at least smeared the helmet with dust or something, instead of just using a new, UNUSED helmet for the pic.

Then there's this Oscar-worthy performance. Oh wait, they did get an Oscar.


Only 179 views? Another fraud, as this video has probably been seen millions of times, but the truth-haters at Youtube are obviously keeping the count down, so us sheeple don't start waking up and asking, "What in the Hell is going on, is the MSM lying to me?"

That answer is YES.

Another great article from the very brave, filled with integrity, Vanessa Beeley. Most of the REAL reporting coming from dangerous spots like Syria is from women like Ms Beeley and Eva Bartlett. While their male counterparts--posing as journalists--sit back home, in comfy surroundings, playing stenographer and dutifully retyping in their voice, BS and propaganda from the CIA or MI6 or NATO or Israel. Males w/o balls too emasculated & scared to actually go into danger zones, unlike the brave ladies who do and give us the TRUTH.

(For some strange reason, Wikipedia doesn't like Ms. Bartlett & refuses to acknowledge that Ms Beeley exists. There, that will teach you two uppity women to know your place!)

I am a director not only of a Syrian Civil Defence Unit, but of brave human beings, volunteers who risk their lives, despite the terrorism that is invading Syria, to maintain security for Syria. I give thanks from my heart for the courage of my men who have lost their comrades in terrorist attacks but they keep working despite the risks. They are true soldiers, their equipment and their spirit are their only weapons ~ Director of Tartous’ REAL Syria Civil Defence 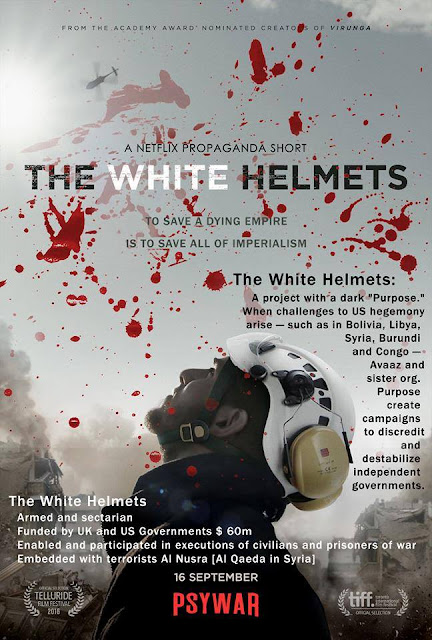 Did I hear a pin drop? The real Syria Civil Defence? Are the west’s iconized ‘White Helmets’ not the only emergency first-responders inside Syria?

For the REAL Syria Civil Defence you call 113 inside Syria. There is no public number for the White Helmets. Why not? Why does this multi-million dollar US & NATO state-funded first repsonder ‘NGO,’ with state of the art equipment supplied by the US and the EU via Turkey, have no central number for civilians to call when the “bombs fall”?

The brave, TRUTH-telling REAL journalists, Ms Beeley and Ms Bartlett, need to be careful, because their are some very powerful, sinister forces that would love to see them silenced.....permanently.

Watch your back ladies and keep up the most excellent work.
Posted by Greg Bacon at 5:41 AM