“The CIA owns everyone of any significance in the major media.”

“The CIA owns everyone of any significance in the major media.” Attributed to former CIA Director William Colby, who died shortly after, in a mysterious canoeing accident...at night.

Udo Ulfkotte reveals in his bestseller Bought Journalists, how he was “taught to lie, to betray and not to tell the truth to the public.”

The former editor of Frankfurter Allgemeine Zeitung, which is one of Germany’s largest newspapers, was secretly on the payroll of the CIA and German secret service, spinning the news in a way that was positive for the United States and bad for its opponents.
In his latest interview, Ulfkotte alleges that some media are nothing more than propaganda outlets of political parties, secret services, international think tanks and high finance entities.

Repenting for collaborating with various agencies and organisations to manipulate the news, Ulkotte laments, “I’m ashamed I was part of it. Unfortunately I cannot reverse this.” 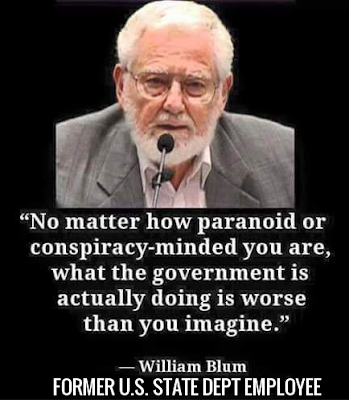 “I was bribed by billionaires, I was bribed by the Americans to report…not exactly the truth.”
Shortly after this video was out, Ulfkotte died from a heart attack on 13 January 2017 at the age of 56.


The US military’s vision for state censorship 5 October 2018

In March, the United States Special Operations Command, the section of the Defense Department supervising the US Special Forces, held a conference on the theme of “Sovereignty in the Information Age.” The conference brought together Special Forces officers with domestic police forces, including officials from the New York Police Department, and representatives from technology companies such as Microsoft.

This meeting of top military, police and corporate representatives went unreported and unpublicized at the time. However, the Atlantic Council recently published a 21-page document summarizing the orientation of the proceedings. It is authored by John T. Watts, a former Australian Army officer and consultant to the US Department of Defense and Department of Homeland Security.

The Atlantic Council, a think tank with close ties to the highest levels of the state, has been a key partner in the social media companies’ censorship of left-wing views. Most notably, Facebook acted on a tip from the Atlantic Council when it shut down the official event page for an anti-fascist demonstration in Washington on the anniversary of last year’s neo-Nazi riot in Charlottesville.

Confident that none of the thousands of journalists in Washington will question, or even report, what he writes, Watts lays out, from the standpoint of the repressive apparatus of the state and the financial oligarchy it defends, why censorship is necessary.

Watts cites the precedent of the invention of the printing press, which helped overthrow the feudal world order. In the Atlantic Council’s estimation, however, this was an overwhelmingly negative development, ushering in “decades, and arguably centuries, of conflict and disruption” and undermining the “sovereignty” of absolutist states. The “invention of the internet is similarly creating conflict and disruption,” Watts writes.

“Trust in Western society,” he warns, “is experiencing a crisis. The 2018 Edelman Trust Barometer has tracked this erosion, showing a 30 percent drop in trust in government over the last year in the United States.”[GOOD, THE FUCKERS ARE GETTING NERVOUS. KEEP UP THE PRESSURE!]

Watts notes that this collapse in support for the government cannot be explained merely by the rise of social media. This process began in the early 2000s, “at the dawn of the social media age but before it had become mainstream.” Left out are the major reasons for the collapse of popular support for government institutions: the stolen election of 2000, the Bush administration’s lies about weapons of mass destruction, unending war and the impact of the 2008 financial crisis...

When “radical and extremist views” and “incorrect ideas” are “broadcast over social media, they can even influence the views of people who would not otherwise be sympathetic to that perspective,” Watts warns. “When forwarded by a close friend or relation, false information carries additional legitimacy; once accepted by an individual, this false information can be difficult to correct.”

People must be isolated, in other words, from the “incorrect” ideas of their friends and family, because such ideas are “difficult to correct” by the state once disseminated...

Enter the social media companies. The best mechanism for suppressing oppositional viewpoints and promoting pro-government narratives is the private sector, in particular “technology giants, including Facebook, Google, YouTube, and Twitter,” which can “determine what people see and do not see.”

Don't give up gentle and good-hearted GOYIM, for that just makes the job of their NWO JWO nightmare come about more easily.

FIGHT TILL YOUR LAST DYING BREATH, IF NOT FOR YOU, THEN FOR OUR KIDS!