Just anudder (((Cohen)))incidence anytime Israel is involved in savagery of us Gentiles.

This shameless descent was starkly illustrated last week when hundreds of heavily armed Israeli soldiers, many of them masked, raided a neighbourhood of Sur Baher, on the edges of Jerusalem. Explosives and bulldozers destroyed dozens of homes, leaving many hundreds of Palestinians without a roof over their heads.

During the operation, extreme force was used against residents, as well as international volunteers there in the forlorn hope that their presence would deter violence. Videos showed the soldiers cheering and celebrating as they razed the neighbourhood.

Here's a pic of the WTC complex, during the Israeli masterminded 9/11 False Flag. 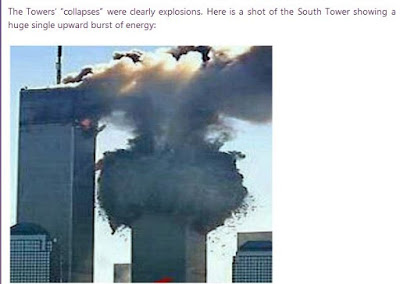 And here's a pic of the Israeli demolitions in Sur Baher, in Occupied Palestine:

Look mighty similar to me. The puffiness of the explosion, the color and the devastation that brought down the buildings in NYC and the one in Occupied Palestine.

Here's anudder similarity. On 9/11, Mossad thugs were in a New Jersey park, cheering and hi-fiving each other when the Twins were attacked. Just like they're doing now in Occupied Palestine, when they destroy the buildings of the indigenous Palestinians.

Can't find the Palestinian video on JOOtube, so you'll have to click on this link to see the sick and twisted Israelis celebrating the grief and misery they cause.

Here's the world's most moral army celebrating destroying the homes of Palestinians... 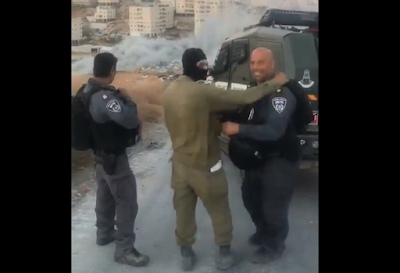 And here's the 'world's most moral army' laughing it up after they shot an unarmed Palestinian. What kind of sick fuck celebrates the cold-blooded murder of another human being? 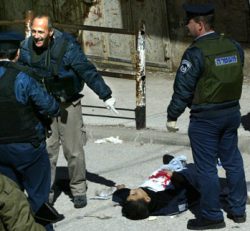