WTF? Anybody who believes that only dirty knickers & shirts are in that bag, raise your hand. What is that loathsome mother fucker Nuttyahoo bring in to the WH? Ecstasy, since Israel is one of the biggest XTC manufacturing sites on the planet?

This is beyond bizarre. Israel can use diplomatic pouches to bring in anything they want to, without interference. Anything from a briefcase to a 40 foot long shipping container falls under diplomatc immunity, so why is Nuttyahoo bring in dirty laundry to the WH? Is this Nuttyahoo letting Trump know you my bitch, bitch, now clean my shit-stained undies? Or is there something much more sinister, that has to do with Israel harvesting human organs from Syrians? 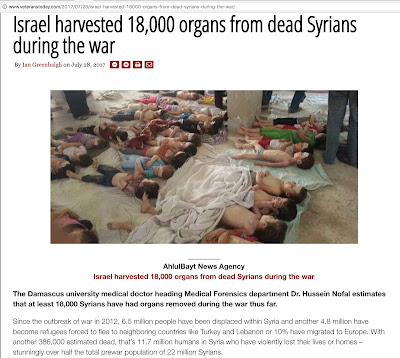 This is legit, here's the original WP article:

Israel’s Netanyahu brings his dirty laundry to Washington. Literally. Over the years, the Israeli leader has developed a reputation among the staff at the U.S. president’s guesthouse for bringing special cargo on his trips to Washington: bags and suitcases full of dirty laundry, according to U.S. officials familiar with the matter.

The clothes are cleaned for the prime minister free of charge by the U.S. staff, a perk that is available to all foreign leaders but sparingly taken advantage of given the short stays of busy heads of state.

“The Netanyahus are the only ones who bring actual suitcases of dirty laundry for us to clean,” said one U.S. official, who like others spoke on the condition of anonymity to discuss the details of a foreign leader’s visits. “After multiple trips, it became clear this was intentional.”

"GOY Donny, do a better job of getting those nasty skidmarks out of my undies!"

Report claims Prime Minister and wife bring laundry from Israel on official visits to be cleaned 'free of charge by U.S. staff,' matching years of Israeli reporting on the Netanyahus' habit.

American officials are perplexed by Prime Minister Benjamin Netanyahu’s habit of bringing bags of dirty laundry from Israel to the United States on official visits in order for the clothes to be washed by U.S. government workers, according to a report published Wednesday in the Washington Post.

The report matches years of reporting by Israeli journalists but is the first time that American officials have commented on the subject in a leading American publication.

So what's in those dirty laundry bags? Adrenochrome? Dirty money Nutty needs to have Trump launder for him? Biowarfare agents? THANKS a lot to anonymous for this wonderful tip.
Posted by Greg Bacon at 11:29 AM