Guess Which Terrorist Nation Was the First to Use DU Rounds?

Bravo to Greece, the same nation the banksters have been raping. What was their crime?


Greece has decided to take off all DU shells from their inventory. The Greek Navy has in all about 15,000 shells, which are used in the air defense system Phalanx (Close-In Weapons System). During exercises since 1990, 30,000 rounds of 20mm ammunition were fired. It is not clear where they have been fired. In the nineties Greece rejected a US offer of 100,000 DU tank shells after which they were exported to Turkey. (Associated Press, 8 January, 2001)

My government, which lies so much, it has to tell more lies to cover up the original lie, is now claiming to have only used a little over 5,000 DU rounds in Syria. My guess is that it's probably closer to ONE MILLION rounds, since the Zionists and their Jew Overlords have Syria in their sights and won't let go till that nation is completely devastated.

Here's a pic of the DU used against Iraq in the first Operation Desert Slaughter in 1991, which only lasted FIVE weeks. They war against Syria has been ongoing for over 6 years. Do the math....

American geoscientist and international radiation expert Leuren Moret says the whole country of Syria is plagued with radioactive contamination because the United States not only used depleted uranium weaponry, but provided it to terrorists fighting against the Syrian government.

Dr. Moret made the remarks in interview with Press TV on Friday, days after the Pentagon admitted that it used depleted uranium (DU) ammunition in Syria, the controversial weaponry that causes serious health problems among the population. 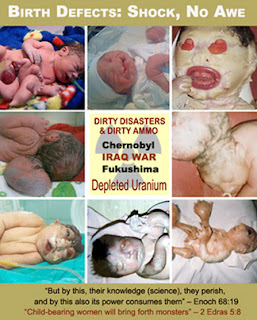 Dr. Moret said the use of depleted uranium ammunition is “not limited just to attacking Daesh, or ISIL, positions in Syria in late 2015.

Actually, the US government, the Pentagon has used depleted uranium in Syria from the very beginning, and that would be after [President Vladimir] Putin announced Russia would be assisting the Syrian government in removing the terrorists from Syria.”