Isn't it About Time for a MOSSAD Allahu Akbar™ False Flag Special?

Kinda slow lately--at least in the West--especially compared to last year, with Allahu Akbar™ False Flags breaking out all over Europe, to the ME, which is in the Zionist cross-hairs, to the USA. Maybe it's because the MOSSAD Recording Studios in Herzliya, Israel is revamping their sadistic videos to get rid of the voice shouting Allahu Akbar™ since it was the same voice, whether the USA/Israel/Saudi Arabia backed thugs were murdering people in Libya or Iraq or Syria, so they needed a fresh approach?


Located at Fort Leavenworth, Kan., the School for Advanced Military Studies is both a training ground and a think tank for some of the Army's brightest officers. Officials say the Army chief of staff, and sometimes the Joint Chiefs of Staff, ask SAMS to develop contingency plans for future military operations. During the 1991 Persian Gulf war, SAMS personnel helped plan the coalition ground attack that avoided a strike up the middle of Iraqi positions and instead executed a "left hook" that routed the enemy in 100 hours.
The cover page for the recent SAMS project said it was done for the Joint Chiefs of Staff. But Maj. Chris Garver, a Fort Leavenworth spokesman, said the study was not requested by Washington.

Of the Mossad, the Israeli intelligence service, the SAMS officers say: "Wildcard. Ruthless and cunning. Has capability to target U.S. forces and make it look like a Palestinian/Arab act."

Remember this Zionist False Flag in Gay Paree back in January 2015?

The footage was shot from the roof of the Charlie Hebdo building by an Israeli Film Director Amichai Stein, the deputy editor of Israeli IBA Channel 1, who just happened to be at the scene on the roof. Notice how calmly he holds the cellphone/camera. So steady, as if he knew he wouldn't be shot.

And the luck he had to be there at THAT moment, why the man must have ESPN! Why, he also just happened to be in Turkey for the June 2016 Ataturk airport attack! Gosh, is he lucky or what? Hope he got the MOSSAD Oscar for Best Camera work during a Zionist False Flag!


That Stein is as lucky as another Zionist Jew, Richard Gutjahr who just happened to be on the scene at the July 2016 Nice truck attack and the July 2016 Munich shooting. Gosh, what are the odds of that? Film two different Allahu Akbar™ specials in one month? The man must have racked up some serious MOSSAD Airways frequent flier miles.


The cameraman apparently pre-placed on the balcony to film the beginning of the truck attack is German journalist and blogger named Richard Gutjahr…who just happens to be married to Israeli potentate Einat Wilf, a former Israeli Intelligence Officer in Unit 8200 who served as foreign policy advisor to Shimon Peres, strategic consultant to MacKenzie and Co. in New York, and a general partner in Core Venture Capital in Israel. In 2007 she ran for the presidency of the World Jewish Congress. (The presence of highly-placed Israelis and friends in strategic positions to film terror events is getting out of hand…we saw the same thing with the Charlie Hebdo and Brussels Airport events.)

But don't think about that, instead focus your vile and venom on the Muslims, and our CIA and their MOSSAD will give us plenty of action!

Maybe the thug-infested and run CIA is making the Allahu Akbar™ video this time, and they're trying to find someone to shout in Russian, Allahu Akbar™ so Insane McCain and that lover of Oscar Mayer products, Lindsey Graham, can get their war on against Russia, to please their masters in the MIC?

After all, w/o the CIA's expert help, the Israeli masterminded 9/11 False Flag would never taken place.

Speaking of that Zionist rag, 'Charlie Hebdo,' does anyone remember this atrocious front cover that a large majority of Americans never got to see, since it would interfere with the endless 'Wars for Wall Street and Israel?' 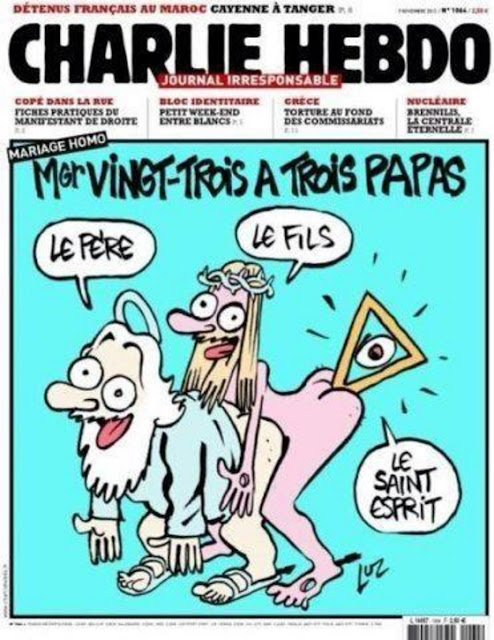