Meet One of Israel's Best Buddy's "Butcher of the Great Lakes, Paul Kagame' 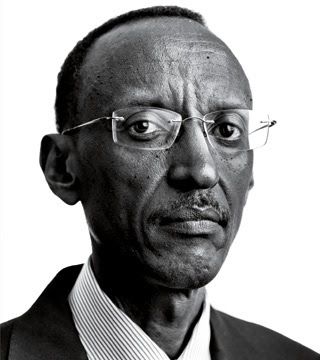 Why Israel loves their personal butcher SO much, he spoke at the recent AIPAC 'Salute to Apartheid Israel' love fest held in DC in March.


On March 26, Rwandan military dictator Paul Kagame, known as Butcher of the Great Lakes, became the first African ruler to address America’s most powerful lobby group AIPAC, in Washington DC, on behalf of Israeli prime minister Benjamin Netanyahu. He is the only non-Jewish leader who is allowed to invoke word Holocaust or genocide for people other than Jews by the organized Jewry.

Paul Kagame was also honored with Casino Mafia Foundation’s Dr. Miriam and Sheldon Adelson Prize for Outstanding Friendship with Israel – or a friendship between two genocidal regimes by The World Values Network founded by Rabbi Shmuley Boteach. The other people who had been honored with award included Elie Wiesel.

Just don't use the sacred, trademark protected word, Holocau$t™ GOYIM! Especially for Schwartzas, we'll be moving them to Europe anyway! 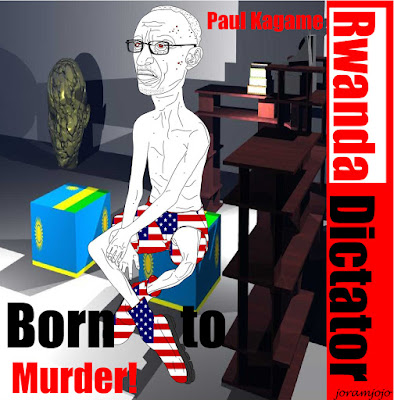 THE UN AND THE US GETTING TIRED OF SUPPORTING AND COVERING UP FOR KAGAME’S BUTCHERING OVER 8,000,000 IN RWANDA AND DRC

In 1979, the international community was so incensed and ashamed of the butchery practiced by Idi Amin Dada, the dictator of Uganda, that they helped President Nyerere’s Tanzanian army to actually invade Uganda and chase Idi Amin Dada who went into exile in Saudi Arabia.

Paul Kagame, the “ferocious mass killer” also known as the “Butcher of the Great Lakes”, beats Idi Amin by far and he has even outpaced Adolf Hitler’s slaughter of 6 million Jews, as Nicholas Kristof wrote in the New York Times (“Congo’s Killing Fields Worse than Holocaust”, 2/6/2010). Indeed, Hitler Kagame has killed hundreds of thousands of RwandanTutsis and Hutus – collateral sacrifice for his acquiring power by force in 1994-5, which he could not achieve democratically, his Tutsi group being a tiny minority of the total Rwandan population, 8.4% in 1991 census – (in Recensement general de la population et de l’habitat au 15 aout 1991, Service National de Recensement, Republique Rwandaise, p.124 – in “Paul Kagame: ‘Our Kind of Guy’” by Edward Herman, 10/5/2010). Then, in the most callous and despicable acts ever practiced by a mass killer, Kagame collected the skulls of the Hutus and Tutsis he had killed and built a monument on the big lie that these were Tutsis killed by Hutus and that he’s the one who stopped the carnage, deceiving the world with this big lie, especially since skulls cannot speak (but UN, independent investigators, and other Tutsis can and they’ve done so (www.rwandadocumentsproject.net

Hitler Kagame has added to his butchery total since invading the Congo in 1996, where he has sexually abused and mutilated over 2,000,000 females (even the elderly and little girls as young as 4 years old) and butchered over 8,000,000 innocent Congolese (in his attempt to wipe out the Congolese population of Eastern DRC and to replace it with Tutsis, annexing it and permanently exploiting Congo’s resources).

This Butcher of the Great Lakes is so incredibly despicable in the different manners that he taught his troops to slaughter the elderly, men, women, and little children (one needs to read the accounts of former Tutsis members of Kagame’s army, i.e., Testimonies of Dr. Theogene Rudasingwa to BBC, or that of Lieutenant Abdul V. Luzibiza, who fled Rwanda in 2001 and had, since, been assassinated by poisoning, which is one of the ways Hitler Kagame gets rid of anyone who disagrees with him, including his Tutsi colleagues as well as those who committed atrocities he ordered or were witnesses to his crimes, thereby erasing permanently anyone who might expose or testify against him in the future).

(The original New York Times story by Kristof, “Congo’s Killing Fields Worse than Holocaust” is no longer at the Times. Guess someone got PO that the sacred Holy Holocau$t™ word was mentioned in a story that wasn't about Das Juden.)

Wow, who wouldn't want to get cozy with this blood-soaked son of a bitch?

It was an ad for a event in New York devoted to the Rwandan genocide.

What struck me especially about the ad was that the pictures of the speakers were even larger than the headline and meant to promote them as much or more than the topic. The speakers featured were Paul Kagame, president of Rwandan and accused murderer of numerous political foes; Elie Wiesel, once a Nobel laureate and now a neocon mouthpiece and beneficiary of the largesse for John Hagee, Sheldon Adelson (whose title in the ad is “Global Holocaust Memory Philanthropist, whatever that means); Michael Steinhardt, hedge fund manager, GOP neocon, and co-founder of Birthright; and Shmuley Boteach (“America’s Rabbi”), most recently failed GOP candidate for a NJ Congressional seat.

Israel, as a seminal article in Maariv pointed out, played both sides against the middle in the Rwanda civil war. Even before the slaughter commenced in 1994, Israel was supplying weapons officially to the Hutu-led government, which used them to fight against rebel forces under Kagame’s command. Israeli arms suppliers continued covertly selling to the genocidal militias who murdered 800,000 Rwandan Tutsis.

Well, if Smelly Boturd's in favor of mass-murder, Kagame must be 'our kind of guy...if you like mass-murderers and there's one Tribe that loves those kind of psychos.


Paul Kagame: “Our Kind of Guy”

What if we got it wrong about the massacres that ripped across Rwanda in 1994? According to Edward S. Herman and David Peterson, what really happened was not a genocide by the Hutu Power against the Tutsis, but a secret U.S. war that butchered an equal number of victims on both sides of the Hutu-Tutsi divide. At the heart of this slaughterous game we find the impervious Paul Kagame.

Rwanda’s President Paul Kagame clearly is another “our kind of guy”: Like Suharto, Kagame is a double-genocidist, and one who ended any social democratic threat in Rwanda, firmly aligned Rwanda with the West as a U.S. client, and opened the door to foreign investment. Later, and far more lucratively, Kagame helped carve out resource-extraction and investment opportunities for his own associates and the U.S. and other Western investors in neighboring Zaire, the massive, resource-rich Central African country renamed the Democratic Republic of Congo (DRC) in 1997 during the First Congo War (ca. July 1996 - July 1998).

What say Ye, Israel, is your kind of guy the world's worst mass-murderer in the last 22 years?


Rwanda's Untold Story Documentary from RDI-Rwanda Rwiza on Vimeo.
Gosh, what kind of shape would the world be in if Israel did not exist? I shudder to think of something of that magnitude.
Posted by Greg Bacon at 10:24 AM