Another Zionist Massacre in Palestine that CNN Won't Show..Kafr Qasim

Another example of Israel using a crisis, the 1956 Zionist invasion of the Sinai to steal the Suez Canal, as cover for one of many, many massacres. 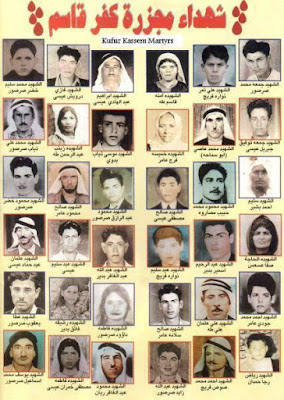 “29 October 1956: Israeli frontier guards started at 4 pm what they called a tour of the Triangle Villages. They told the Mukhtars (Aldermen) of those villages that the curfew from that day onwards was to start from 5 pm instead of 6 pm. They reached Kafr Qasem around 4:45 and informed the Mukhtar protested that there are about 400 villagers working outside the village and there is not enough time to inform them of the new times. An officer assured him that they will be taken care of. Then the guards waited at the entrance to the village. 43 Kafr Qasem inhabitants were massacred in cold blood by the army as they returned from work, their crime was violating a curfew they did not know about. On the northern entrance of the village 3 were killed and 2 were killed inside of the village. Amongst the dead were men, women, and children. Lutanat Danhan was touring the area in his jeep reporting the massacre, on his wireless he said “minus 15 Arabs” after a while his message on the radio to his H.Q. was “it is difficult to count”.” 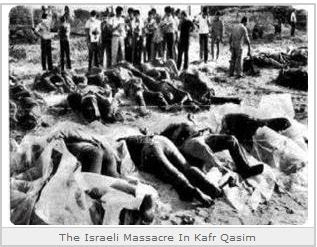 On the day of the massacre, the Israeli army decided to place all seven villages along the green line under a curfew called the War Time Curfew, from 5 in the evening until 6 the following morning. Israeli soldiers were instructed to shoot and kill any villager violating the curfew.
Even though the border police troops were given the order by their commander at 3:30 in the afternoon, they only informed the mayor of Kafr Qasim about an hour later, leaving a window of 30 minutes for the 400 villagers working in the fields or outside the village to come back home.

According to Israeli investigation committee records, from 5:00 pm until 6:30 on October 29, 1956, border police shot and killed 49 villagers from Kafr Qasim as they tried to return home. Among those killed were 23 children and one pregnant woman.

The killed and injured were left unattended through the night. After the curfew ended, villagers took the injured to hospitals and laid the dead to rest in a mass grave.

In his testimony during the investigation, the survivor Jamal Farij said that soldiers shot villagers without any warning. He was driving back to his village along with 28 passengers in a truck.

‘We talked to them. We asked if they wanted our identity cards. They didn’t. Suddenly one of them said, ‘Cut them down’ – and they opened fire on us like a flood.’

Eight Israeli soldiers were charged by the Israeli court and found guilty of murder. The two commanding officers of the unit, Malinki and Dahan, received 17 and 15 years’ imprisonment, respectively. These sentences were later reduced.

Colonel Issachar Shadmi was tried and found guilty only of extending the curfew without authority. He was released after paying a fine of one Israeli cent. On November 1959, after two years, all eight convicted soldiers were released on orders by the Israel Committee for the Release of Prisoners .
Malinki retained his military post and got a promotion to be in charge of security for a top secret Israeli Nuclear Research Center located in the Negev. Dahan was appointed as the head of the “Arab Affairs” department by the city of Ramla, another Palestinian village Israel taken over during 1948.

That will teach those Khazar commanders, promote the murderers after the massacre, show them Israel REALLY means business!

They know, too, that in spite of whatever reticence exists among many to ever speak out, the majority of Jews in Israel and Arabs in Palestine already know exactly what has been happening every day on the ground for many decades since 1948. They are not, as Pappe pointedly declares, “deaf to all the cries, pain and devastation of those killed, raped or wounded throughout 1948.…arrested and imprisoned in the 1950’s….massacred in the village of Kafir Qasim in 1956…..or when citizens of the state were murdered by the army just because they were Palestinians….They know about the war crimes committed throughout the 1967 War and callous bombings of refugee camps in 1982….They have not forgotten the physical abuse meted out to Palestinian youth in the occupied territories in the 1980’s and afterwards….Israel Jews are not deaf and can still today hear the voices of the military officers ordering the execution of innocent people and the laughter of the soldiers standing by and watching….They are also not blind. They have seen the remains of the 531 destroyed villages and the ruined neighborhoods…… They see what every Israeli can see but for the most part chooses not to…..the remnants of villages under the houses of the Kibbutzim and beneath the pine trees of the JNF (Jewish National Fund) forests….