Video PROOF that FIRE Will Not Collapse a Skyscraper

None of these buildings collapsed into their own footprint at near-freefall acceleration, so why did the World Trade Center buildings?


To this list, add the Grenfell Tower in London. 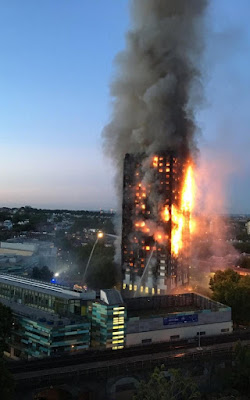 9/11 was an Israeli masterminded False Flag with help from traitors in the WH, the Pentagon, CIA, FBA and NSA. With generous help from the Lying MSM.

Need more proof that fire will NOT collapse a skyscraper? The Marina Torch Hotel burned for several hours, the structure is intact.

A huge fire swept through the Torch Skyscraper in Dubai, Saturday. Strong winds fanned the flames as the fire service struggled to contain them. The blaze is thought to have originated in the middle of the tower before quickly spreading across some 15 floors.

Bin Laden Legend 'Made in the USA!'

Osama Bin Laden’s close association with Americans linked to military and intelligence agencies continued long after he had issued his famous “death to Americans” proclamation in 1998 – the same year the CIA, through its agent Sgt. Ali Mohamed, bombed US embassies in Kenya and Tanzania and blamed the carnage on Bin Laden.

Whistle-blowing FBI translator Sibel Edmonds says that the US maintained ‘intimate relations’ with Bin Laden “all the way through September 11th.” These “intimate relations,” Edmonds explains, consisted of using Bin Laden’s fighters as a proxy terrorist army to attack America’s competitors including Russia and China.

In July 2001 – at precisely the same time New York Zionist mafia figures Larry Silverstein, Frank Lowy, and Lewis Eisenberg were privatizing and over-insuring the condemned-for-asbestos World Trade Center – Bin Laden was being treated for kidney failure at the American Hospital in Dubai by a US intelligence linked specialist, Dr. Terry Callaway.

Dubai CIA station chief Larry Mitchell, as well as the head of Saudi intelligence, visited Bin Laden at the hospital.

On September 11th, 2001, Bin Laden was back in the hospital. This time he was getting dialysis treatment at the Pakistani military hospital in Rawalpindi, right under the noses of US military advisors.

Why didn’t the US simply ask its client governments in Dubai and Pakistan to arrest Bin Laden, then the world’s most wanted terrorist, while he was immobilized in the hospital on dialysis? The answer, of course, is that Bin Laden was a protected US intelligence asset.

Obviously the story of Osama Bin Laden the anti-American terrorist mastermind is a “legend” in both of that word’s meanings: It is a fantastic tale; and it is the concoction of one or more intelligence agencies.

Question: Why are the media placing so much focus on this story which is mostly a non event?

Answer: These kind of stories were non-existent until Israel started placing 'throw-away' knives close to the body of an executed Palestinian. Now the knife stories are a damn near weekly routine, thanks to the Zionist MSM.

This is an effort by Israel and her fifth columnists to conflate Israel's brutal occupation of Palestine with the phony War of Terror, so the West will blindly support Israel's ethnic cleansing of Palestine and her GOY Flunkies, the uSA, England, France and Germany will keep destroying ME nations for the glory of Apartheid Israel. Then it will be on to Iran.