What the (((Deep State))) Looks Like..and it's not pretty 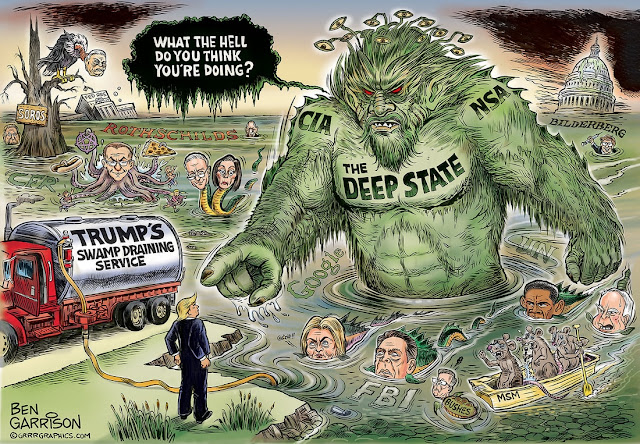 Like the overall pic, but to show Herr Trump as not being part of the ((Swamp))) is misleading.

I'm no fan of Trump, but the USG, the (((FED))) and Wall Street are so vast, corrupt and out-of-control that NO ONE could prevent the next planned Wall Street implosion from hitting the fan. Might be good in the long run, IF Congress starts prosecuting the ones guilty of the frauds and thefts that is tearing apart the USA. Like Iceland did after the 2008 Crash, they refused to pay off the bank's debts, tossed many bankers in jail and now their economy is doing just fine.

But don't ever point out (((who))) is behind all these Wall Street frauds and Ponzi schemes, why that's anti-Semitic!

And their Congressional lackeys are working overtime to criminalize ANY criticism of Israel and her Wall Street con artists who have been looting TRILLIONS from Americans for decades.

What does this ((Deep State))) Have Planned for their American Goyim?


In Kharkov the priest Dmitri was undressed. When he tried to make the sign of the cross, a Chekist cut off his right hand. Several sources tell how the Chekists in Kharkov placed the victims in a row and nailed their hands to a table, cut around their wrists with a knife, poured boiling water over the hands and pulled the skin off. This was called “pulling off the glove”. In other places, the victim’s head was placed on an anvil and slowly crushed with a steam hammer. Those due to undergo the same punishment the next day were forced to watch.

The eyes of church dignitaries were poked out, their tongues were cut off and they were buried alive. There were Chekists who used to cut open the stomachs of their victims, following which they pulled out a length of the small intestine and nailed it to a telegraph pole and, with a whip, forced the unlucky victim to run circles around the pole until the whole intestine had been unravelled and the victim died. The bishop of Voronezh was boiled alive in a big pot, after which the monks, with revolvers aimed at their heads, were forced to drink this soup.

Other Chekists crushed the heads of their victims with special headscrews, or drilled them through with dental tools. The upper part of the skull was sawn off and the nearest in line was forced to eat the brain, following which the procedure would be repeated to the end of the line. The Chekists often arrested whole families and tortured the children before the eyes of their parents, and the wives before their husbands. Mikhail Voslensky, a former Soviet functionary, described some of the cruel methods used by the Chekists in his book “Nomenklatura” / “Nomenclature” (Stockholm, 1982, p. 321):

“In Kharkov, people were scalped. In Voronezh, the torture victims were placed in barrels into which nails were hammered so that they stuck out on the inside, upon which the barrels were set rolling. A pentacle (usually a five-pointed star formerly used in magic) was burned into the foreheads of the victims. In Tsaritsyn and Kamyshin, the hands of victims were amputated with a saw. In Poltava and Kremenchug, the victims were impaled. In Odessa, they were roasted alive in ovens or ripped to pieces. In Kiev, the victims were placed in coffins with a decomposing body and buried alive, only to be dug up again after half an hour.” Lenin was dissatisfied with these reports and demanded: “Put more force into the terror!”

To find out more, read Jura Lina's excellent book, "Under the Sign of the Scorpion, that is online!